London and New York: 88% of Consumers Less Likely to Buy From Companies Who Leave Complaints on Social Media Unanswered. Conversocial Identifies the Consequences for Ignoring Customers’ Tweets and Posts 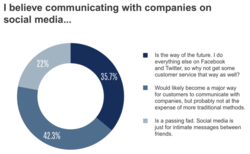 Entitled, The Consequences of Ignoring Your Customers, A Survey of Consumer Expectations for Customer Service on Social Media Platforms, the research was commissioned by Conversocial and conducted by Assistant Professor of Communications Liel Leibovitz at New York University. Today’s study looks at consumers’ sentiments and expectations concerning interactions with companies on social media platforms. (It follows Conversocial research on Retail Outlets Ignoring Their Customers in October, which revealed that over 65% of genuine questions and comments were missed by the largest retail brands.)

The following are its key findings:

“The message to companies from their customers is now clear: if you want to speak to us in social media, you better be prepared for us to speak back”, said Josh March, CEO of Conversocial. “If your company is on Facebook or Twitter, be prepared to treat these social networks as serious customer service channels. If not, you risk losing not just your current customers communicating with you via posts and tweets, but the vast number of potential customers who now have a window to see how you respond to (or ignore) your customers in full public view.”

"There's a tremendous reservoir of customer goodwill that companies can tap from social media,” March cited a recent Facebook poll showing 33% of users go straight to a company’s Facebook page after seeing a friend’s recommendation on Facebook.

“While social media sites are a growing frontier of consumer-corporate interaction, most respondents reported inadequate response times, unanswered queries, and unmet expectations,” according to Assistant Professor of Communications at NYU, Liel Leibovitz, who led the survey. “Most respondents were also adamant that such behavior would have some or much effect on their future decision to do business with offending corporations.”

The research was conducted in the last 2 weeks of November. A total of 513 consumers were surveyed nationwide, with the average age of respondent being 38 years of age.

Headquartered in London,Conversocial is expanding into the American market and recently announced they have processed more than 35 million customer service interactions on social media, growing at a clip of 2.5 million per month. Companies and organizations such as Groupon, ITV, Tupperware and The University of Phoenix are using Conversocial's Software-as-a-Service to manage the flow of customer service enquiries and discussions on Facebook and Twitter.