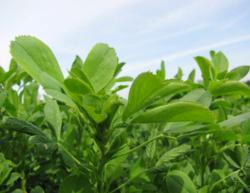 “Nutiva is concerned about the impact that genetically modified organisms are having on our natural world..."

Last month the United States Department of Agriculture (USDA) announced the deregulation of Monsanto’s genetically engineered, Roundup-Ready alfalfa. According to the New York Times, this “would authorize the unrestricted commercial cultivation of genetically modified alfalfa,” a decision profoundly disappointing to the organic community and one that promises an epic battle to determine the future of organic foods in North America. The Center for Food Safety (CFS), is pursuing all legal remedies to oppose this decision. CFS, a nonprofit organization, representing 180,000 members across the nation, is focused on curbing the use of harmful food production technologies and promoting organic agriculture. CFS Executive Director Andrew Kimbrell said, “CFS’s legal team is the organic community’s last line of defense against this GMO threat to farmers and consumer choice.” Nutiva has pledged $25,000 to CFS to support its legal work.

With Organic Foods Endangered, Who Will Take a Stand Against Monsanto?

Nutiva® founder and CEO, John W. Roulac, comments on the deregulation, “Nutiva is concerned about the impact that genetically modified organisms are having on our natural world and human health. Since its inception in 1999, Nutiva has exclusively sourced non-GMO ingredients.” According to Roulac, the impending massive spring 2011 planting of Monsanto GMO alfalfa seed could contaminate vast acres of organic food production. “Now is the time for every corporation that has profited from the organic movement to unite and stop Monsanto. Who else will step forward to protect the sacred natural order for future generations?” If Nutiva, a modest company in a land of large organic firms, can contribute $25,000, what will the largest organic dairy brands, international retailers and distributors do to join in the fight? Nutiva is encouraging all organic advocates to add their financial support to the efforts of CFS. Roulac is no stranger to taking on special interests. In 2002, Nutiva, in cooperation with Dr. Bronner’s Magic Soaps, the Hemp Industries Association and Nature’s Path, successfully sued the DEA in the US 9th Circuit, HIA vs. DEA (# 03-71366) to establish the rights of Americans to consume hemp foods. Also experienced in espousing food industry rights, the Center for Food Safety has tackled GMO alfalfa and prevailed against Monsanto and the USDA before. A recently filed case (# 3:10-CV-04038) CFS vs. Vilack, covers GE sugar beets and is now at the 9th Circuit Court of Appeals.

Can Organics Coexist with GMO Alfalfa?

In the view of CFS, if the biotech industry achieves market dominance in numerous crops, the majority of organic foods will be genetically contaminated with foreign genetic material through pollen drift and accidental co-mingling. Said David Lively, a board member of the Organic Seed Alliance, “The reality is simple: When farmers lose the genetic purity of their seed, they lose their freedom to operate free of GE contamination.” A genetically engineered (GE) or genetically modified organism (GMO) is created in a laboratory process whereby DNA genes of one species, which may come from bacteria, viruses, insects, or animals, are artificially inserted into genes of an unrelated plant or animal. In 2009, the American Academy of Environmental Medicine (AAEM) stated, “. . . studies indicate serious health risks associated with GMO food.” These risks include the chance of infertility, immune problems, accelerated aging, faulty insulin regulation and changes in major organs and the gastrointestinal system.

Nutiva is dedicated to a healthy and sustainable world, demonstrating its mission to nourish people and planet by using delicious organic ingredients, enriching the soil, and donating 1% of sales to sustainable-agriculture groups. Founded in 1999, Nutiva is the world’s best-selling brand of nutritious organic hemp, coconut and chia superfoods. Its products are offered nationwide, as well as in Canada, Mexico, and the European Union, at more than 10,000 natural-food retailers. The company can be followed at http://nutiva.com/ or at http://www.facebook.com/Nutiva.

About the Center for Food Safety

CFS is a national, nonprofit membership organization founded in 1997 to protect human health and the environment by curbing the use of harmful food production technologies and promoting organic and other forms of sustainable agriculture. The Center for Food Safety, http://www.centerforfoodsafety.org/, currently represents more than 180,000 members across the nation.