This fantasy adventure examines a battle over a futuristic holy land. 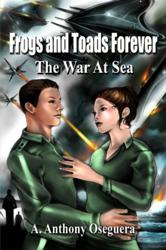 Frogs and Toads Forever: The War at Sea, a new book by A. Anthony Oseguera, has been released by RoseDog Books.

A thousand years into the future, in the present-day Holy Land, now simply referred to as the Kingdoms of The Frogs and Toads, we find a noble people forced to defend their lands against a ferocious enemy. The invading, awesome Crickets, once confined to the Earth’s center, have had to war in order to survive above. Thus, they feel justified in conquering the entire planet. The Alliance, however, means to put a stop to the Cricket advance! This tale enfolds as kings and their best admirals, generals, and colonels lead their navies and armies in hopes of overcoming this brutal military machine! Yes, there is also a love story!

A. Anthony Oseguera, a graduate from Bingham High School (Utah), left early in his life to pursue an acting career in Hollywood. He graduated from the Pasadena Playhouse College of Theatre Arts and then moved to New York where he studied opera. After receiving his Ph.D. in International Broadcasting from the University of Missouri--Columbia, he pursued an educational career by teaching at Chaminade College Preparatory (Saint Louis), Valdosta State University (Georgia), and Eastern Illinois University. As a professor emeritus, he enjoys writing and traveling in the company of his wife, Maggie (his editor), family, and friends. Most recently, he has enjoyed returning to teaching at TriCounty Technical College and Westside High School (both Anderson, South Carolina) where he has taught English and Spanish, respectively. His family brings him his greatest joy!

Frogs and Toads Forever: The War at Sea is a 252-page paperback with a retail price of $26.00. The ISBN is 978-1-4349-8295-7. RoseDog Books of Pittsburgh, Pennsylvania published it. For more information or to request a review copy, please visit our virtual pressroom at http://www.rosedog.com/pressroom or our online bookstore at http://www.rosedogbookstore.com