There was a time not that long ago when eating together over a home-cooked meal was the norm—a ritual with proven social, behavioral and health benefits. And while more Americans are eating in today than at any other time in the past 20 years, a new study shows that they’re trading in their stoves for microwaves. To turn this trend around, Chef Michael Feker is reviving his Family Recipe Revival contest and asking people all over to turn to the one thing that will allow us to cherish those home-cooked meals — the family recipe. 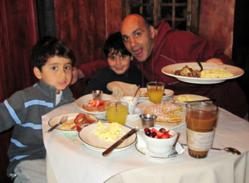 Eating together as a family should be a top priority for everyone everywhere!

This is all a part of my long-fought battle to get people back to the table. I am bringing back the Family Recipe Revival for all those lovers of life and food so they can show their pride in their family recipes!

Back by popular demand, The Family Recipe Revival, will give people the opportunity to submit their favorite family recipe online, along with the story behind it, for a chance to spread hope to those in need. As the name implies, it’s a celebration of the recipes passed down from generation to generation that bring families and friends together.

Starting May 1, 2011, Chef Feker, of IL MITO Trattoria e Enoteca & CMF’s School of Culinary Magic in Wauwatosa, is asking people to share their family recipes. Then voting in June will determine four finalists who will meet for a culinary showdown at Feker’s state-of-the-art Culinary Studio to battle each other for a grand prize trip to Las Vegas. “This is all a part of my long-fought battle to get people back to the table. I am bringing back the Family Recipe Revival for all those lovers of life and food so they can show their pride in their family recipes!”

“As a society, we’ve fallen victim to the convenience of eating on the go and pre-packaged meals and, as a result, have lost touch with the true meaning of mealtime,” Feker said. “Even family recipes, which long represented togetherness, have become something we make only during holidays and special occasions. The Family Recipe Revival is about reminding everyone of the importance of the home-cooked meal and inspiring a renewed sense of cooking.”

Despite the known benefits of eating home-cooked meals, evidence shows that people are cooking meals less and less. According to a December 2009 study conducted by NPD Group, a leading market research company, over the past year sales of pre-packaged meals in supermarkets have sky-rocketed and use of the microwave for meal preparation has increased more than 10 percent.

About Chef Feker and IL MITO

Michael Feker is an accomplished chef with more than 20 years experience, having studied abroad in Switzerland. He learned under the tutelage of renowned chef Roberto Gerometta and has owned restaurants in Los Angeles, Milwaukee and in Wauwatosa. He specializes in traditional Italian cuisine and is also a culinary instructor, owning and operating the Culinary School of Magic, in Wauwatosa.. IL MITO Trattoria e Enoteca is a 57-seat Italian restaurant and wine bar located on the East side of Wauwatosa, Wis. The restaurant opened in 2006 and has become one of the region’s most popular Italian eateries. The restaurant’s owner and chef, Michael Feker, established Il Mito as a destination for simple yet robust Italian that’s affordable. The menu features everything from homemade pastas and salads to signature soups, breads, cheeses and pizza. For more information, visit http://www.ilmito.com.