This collection of cartoons depicts humorous interpretations of palindromes. 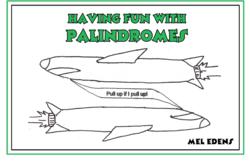 Having Fun With Palindromes, a new book by Mel Edens, has been released by RoseDog Books.

The palindromes used in this book are accompanied by cartooned depictions to convey whatever humorous idea or situation the phrase contains. No palindrome is worthwhile—no matter how long it is—if it does not make any sense. For example, the palindrome “Retrace Nile pipeline, Carter” would not make much sense without the accompanying cartoon depicting Howard Carter (the discoverer of King Tut’s tomb) searching the desert for the tomb, when all he has to do is follow an oil pipeline right to it. The cartoon, combined with the palindrome, brings together the desert, the Nile, Carter, and King Tut, and leads to plausibility. The book has over sixty cartooned palindromes, each designed to give you a good chuckle. Enjoy.

Lieutenant Colonel (Ret) Mel Edens spent many weeks on Alert duty in his capacity as a KC-135 tanker pilot of the Strategic Air Command (SAC) back during the Cold War. As a pastime, he learned to construct crossword puzzles and wordplay games. He has since had over seventy crossword puzzles published in nationally syndicated puzzle magazines.

Palindromes easily became a wordplay challenge for him, with palindrome cartoons his favorite. Friends and relatives encouraged him to compile his efforts into a book that all could share. He found a cartoonist who could humorously convey his palindromic messages and the book became reality, thanks to the people at RoseDog Books.

Having Fun With Palindromes is an 84-page paperback with a retail price of $15.00. The ISBN is 978-1-4349-8326-8. Rose Dog Books of Pittsburgh, Pennsylvania published it. For more information or to request a review copy, please visit our virtual pressroom at http://www.rosedog.com/pressroom or our online bookstore at http://www.rosedogbookstore.com.