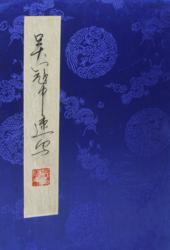 Album of Sketches by Wu Guanzhong

Originally presented as a gift to Alice Boney, the prominent American oriental art dealer. Miss Boney, known as “the doyenne of Oriental art,” was a noted advisor to museums and collectors of Chinese and Japanese art.

Hot on the heels of Asia week in NYC, Kaminski Auctions of Beverly, Massachusetts held its spring Asian auction on April 8th and 9th at 5pm. Ben Wang, Kaminski’s Asian specialist, had put together an important collection of Asian porcelain and ceramics, some dating to the Ming dynasty, as well as some rare pieces of Chinese furniture and art.

The audience was filled with Asian collectors from New York, as well as many well-known Asian dealers from China. Internet and phone bidding from Hong Kong and China was brisk and active throughout the auction.

As expected, the top lot of the sale, which brought $255,000.00, was an important album of sketches by Wu Guanzhong, originally presented as a gift to Alice Boney, the prominent American oriental art dealer. Miss Boney, known as “the doyenne of Oriental art,” was a noted advisor to museums and collectors of Chinese and Japanese art.

Totaling 10 leaves of sketches made with ink on paper, the album depicts the water country scenes of southern China which Marco Polo once described as ” the Venice of the Orient. “

Two items of Huanghuali furniture also reached high prices. An altar table with scroll–form spandrels and side panels with scrolling dragons from a California estate brought $64,000 and a pair of 17th-18th century Huanghuali horseshoe chairs brought over $87,000.

There was heavy competition from the internet and phone bidders for two Ming Dynasty fish bowls. One Wucai fish bowl marked with a Wanli mark under the rim and decorated with fish, lotus flowers, and waterweeds sold for $55,000. While the other,a massive blue and white porcelain fish tank sold for $52,000.

The two lots that brought unexpected prices were a miniature 18th-19th century jade screen on stand depicting a court scene etched in gold which fetched $23,000 from a Hong Kong collector, while a carved 19th century Chinese ivory and rosewood table screen with elaborately carved figures sold for $30,000.

Kaminski Auctions is planning their August Asian auction for August 18, 19, 20th at their new auction gallery at 117 Elliott Street, Beverly, Ma. For more information or to consign please contact Ben Wang at bwang(at)kaminskiauctions(dot)com.

For almost two decades, Kaminski Auctioneers---headed by Frank Kaminski---has specialized in appraising and auctioning fine antiques from estates throughout New England. Kaminski is located with offices in Boston, San Diego and Beverly Hills.