Save on College Tuition By Studying Abroad

Looking to save on college tuition? Save $1,500 on in-state tuition and thousands more off out-of-state or private college tuition when you study abroad. Utilize financial aid, scholarships and grants and save even more. 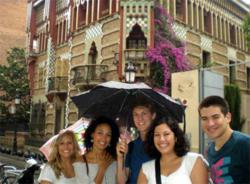 One of the biggest myths out there is that studying abroad costs more than a regular semester. Prices are lower than in-state tuition at many public institutions and the savings are huge compared to out-of-state or private college tuition.

Today's college students are often looking for ways to lower the cost of their college tuition. One way that students are increasingly discovering is spending a semester abroad. By studying abroad, many students are able to actually lower their college bills significantly. Those attending a 4year college in the U.S. pay an average of $9,700 per semester for in-state tuition. For example, a Costa Rica Study Abroad program costs less than $7,000 per semester. Add in airfare and some spending money and the savings is still at least $1,500. Remember this savings is compared to average in-school tuition so the savings for out-of-state and private colleges is many thousands more and can be as much as 75% compared to a semester in their home university.

Not only is this monetary savings significant for students, but the enhanced cultural experience adds a extra dimension to a student's education. Survey after survey of human resource department personnel show that job applicants with international educational experiences and additional language skills standout compared to applicants without these experiences and skills. This translates into more interviews and a higher percentage of job offers. Further, bilingual employees have been shown to earn more over the course of their careers.

In addition to the savings, many college students are just now learning that the myths they have heard regarding studying in other countries are actually far from true. For example, Federal financial aid, scholarships, and certain grants can be used to pursue College Study Abroad. According to industry leader AmeriSpan's co-founder John Slocum, "One of the biggest myths out there is that studying abroad costs more than a regular semester. Prices are lower than in-state tuition at many public institutions and the savings are huge compared to out-of-state or private college tuition. Moreover, financial aid can be used for studying abroad including travel costs." On top of this, study abroad scholarships are available to help students who might otherwise not have the means to pursue this course of study.

Founded in 1993, AmeriSpan Study Abroad offers more than 100 study abroad, language-learning and volunteer programs worldwide for participants of all ages and language level. The Philadelphia-based organization has long been an innovator in the study abroad field, building its reputation by offering high quality, low cost language immersion programs. In September 2010, the company was awarded its 2nd consecutive 'Star Award' as the Best Agency in North America. The industry's prestigious Star Award is voted by organizations worldwide and awarded annually.