An International Film Event for a Social Media Age Audience 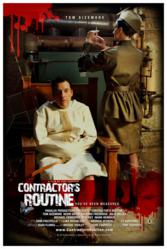 Visually gorgeous and intelligent in the pithy dialogue spoken by the complex characters involved. The work easily vaulted itself to the top of my list. Jared Mobarak, Film Critic

Contractor's Routine's story challenges established social truths, then twists them around our perceptions in a disturbingly memorable way. It's also rich with laughs and insights, as:

◦ art and science,
◦ civility and antisocial behavior,
◦ habit and compulsion,
◦ fantasy and reality

Viewers of Contractor's Routine should prepare themselves for the electric shock of really original angles, perspectives and concepts

The June 3rd 2011 opening of this unique film event at Lumiere Theater is attracting the attention of the Bay Area's leading thinkers and artists. You and every local social media aficionado should be there too. Mind wide open.