Fever in Children: Friend or Foe?

A Recent Report by the American Academy of Pediatrics from February 2011 Highlights the Importance of Fever as an Immune Response to a Viral or Bacterial Infection. As Such, They Recommend Parents with Febrile Children Focus Treatment on Improving the Child’s Overall Comfort Rather than Reducing Fever. Furthermore, Treatment Using Fever Reducers Such as Acetaminophen or Ibuprofen Found at CanDrugStore.com Requires Accurate Dosing Based on the Child’s Weight, Age, and General Health. 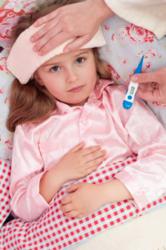 Fever is a natural immune response to infection

In a departure from the traditional wisdom, pediatricians today are advising parents to take a new approach to treating fevers in children. As such, CanDrugStore.com, an online Canadian pharmacy, reminds patients of the importance of fevers when it comes to fighting infection based on new guidelines by the American Academy of Pediatrics that recognizes fever as a natural immune response to infection. .

Traditionally, doctors advised patients to combat fever with medications such as acetaminophen or ibuprofen, but new guidelines recommend an alternative approach. The main goal of treating fever in children should focus on keeping children comfortable while allowing the fever to run its course. Meanwhile, parents should be vigilant about signs of serious illness.

In itself, fever is not a danger and in fact has beneficial effects. Moreover, fever reducers such as acetaminophen actually account for a large majority of overdoses seen in children during emergency room visits. This is not to say that fever reducing medications are not useful. On the contrary, doctors are only recommending that parents understand the advantages of fever when it comes to fighting infection. A fever is one of the body’s natural immune responses for wiping out a bacterial or viral infection. Unless a fever is dangerously high, treating the fever with antipyretics is generally not recommended.

To this end, the American Academy of Pediatrics recommends a revised protocol with regards to treating fevers in children.

Of course, in certain circumstances treatment with fever reducers may be necessary. In these cases, the child must be given the correct dose at the appropriate time. Parents will find affordable access to fever reducers such as acetaminophen and ibuprofen at reputable Canadian online pharmacies such as CanDrugStore.com.