Anthem College criminal justice instructor is named Instructor of the Year by the Missouri Association of Private Career Colleges and Schools (MAPCCS). 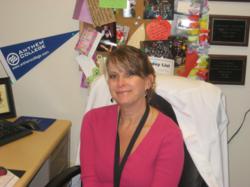 “Tabatha is an extraordinary woman who brings a lot of experience and knowledge to her classroom," says Heidi Wind, President of Anthem College--Maryland Heights. "At times, I sit in her classroom just to listen and view her interaction with students.”

White, who has taught at Anthem College for four years and is the Lead Instructor for its criminal justice program, has worked in the criminal justice field her entire professional life. She earned a BS in Criminal Justice from the University of Missouri—St. Louis, and later, an MS in Human Resource Management from Linwood University.

After working with juvenile offenders for several years in Missouri’s Crider Center for Mental Health, White entered the Eastern Missouri Police Academy and earned her POST (Police Officer Standards and Training) commission. She joined the O’Fallon Police Department, where she worked for three years before training to become a crime scene technician and field training officer.

“As I was training and teaching new officers, I realized that teaching was my passion,” White says. “So after careful consideration and with the support of my family and friends, I decided to pursue my dream of becoming a college instructor. It appeared that fate stepped in and Anthem College became my future.”

“When reviewing the Teacher of the Year nomination form, the only person I thought of nominating was Tabatha White,” says Heidi Wind, President of Anthem College—Maryland Heights. “Tabatha is an extraordinary woman who brings a lot of experience and knowledge to her classroom. At times, I sit in her classroom just to listen to her lecture and to view her interaction with her students.”

Wind credits White with creating Trauma Day, a campus-wide event that simulates a traumatic event complete with volunteers who serve as trauma victims. Students use it to practice how to respond to traumas they can expect to witness in their professional careers. White’s criminal justice students arrest suspects, interview witnesses, and take notes just as they would be expected to do in the field. Students in Anthem College’s other programs—including surgical technologist, dental assistant, massage therapy, medical assistant, pharmacy technician, and medical billing and coding—go through triage, treatment, medication and discharge functions. Massage therapy students provided post-trauma relief massages to “victims” and providers.

Students praise White for her positive attitude, encouragement and ability to motivate them. “To me, she is Anthem College,” one student told Wind. “Her students are her pride and joy,” says Mimnic James, general education program chair at Anthem College.

During her time at Anthem College, White has received several commendations, including:

In addition to teaching at Anthem College, White serves on the Employee Retention and Student Resources Committees and Eastern Missouri Police Academy, where she teaches part-time.

White will be formally recognized at the 24th Annual MAPCCS Conference Friday, April 29, 2011 at Harrah’s Hotel & Casino in St. Louis.