Author encourages victims to embark on their own journey of healing 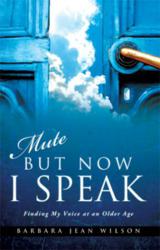 Mute But Now I Speak

Being obedient to the Word of God, I learned and understood the true meaning of forgiveness and loving those who spitefully used and abused me.

Childhood sexual abuse is a silent strangler, holding many adults captive decades after the initial harm was done. But individuals can choose to embark on their own journey of healing and find their “voice” again, says author Barbara Jean Wilson. Her book Mute But Now I Speak ($10.99, paperback, 978-1-61215-800-6; $10.99, e-book, 978-1-61215-696-5) takes readers on a remarkable journey, beginning with the story of a very young girl who found herself in a horrible situation—at the mercy of her mother’s boyfriend, a man she referred to as “Uncle Bob.” The abuse he inflicted led Wilson to grow up much faster than any child should, rebelling against her parents and any figures of authority.

Though she was broken, used, and abused, Wilson says she never took her focus off God. And it was in reading the Bible that she finally found deliverance and healing—freedom from the anguish, shame, and pain she lived with for so long. “Being obedient to the Word of God, I learned and understood the true meaning of forgiveness and loving those who spitefully used and abused me,” says Wilson.

Wilson says the grace of God allowed her to turn her life around. A single mom who dropped out of high school, she battled cancer and drugs but went on to earn her GED and subsequently a bachelor’s degree from Strayer University. “The one constant and prevailing influence in my life has been my overriding faith in God and my belief that God directed and walked this path with me,” says Wilson. “God revealed to me the importance of writing this book to tell my story, which helped in the healing process and set me free. It’s my prayer that sharing my testimony will help others to be set free.”

Xulon Press, a division of Salem Communications, is the world’s largest Christian publisher, with more than 8,000 titles published to date. Retailers may order Mute But Now I Speak through Ingram Book Company and/or Spring Arbor Book Distributors. The book is available online through xulonpress.com/bookstore, amazon.com, and barnesandnoble.com.