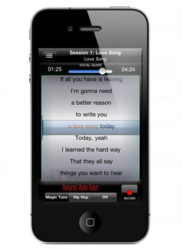 Our voice is the one instrument we’re all born with and it’s a shame that even the most enthusiastic shower-singers can be too embarrassed to let others hear them. We hope that a little support from Auto-Tune will give them the confidence they need.

StarMaker, the popular recordable karaoke iPhone app, got a major update today with the addition of genuine Auto-Tune pitch correction technology. Singers of all skill levels can now harness the power of one of the music industry’s most prevalent and controversial tools to create and share their own recordings with professional polish.

“We’ve leveled the playing field for casual singers,” says Nathan Sedlander, President and Co-founder of StarMaker Interactive. “Our voice is the one instrument we’re all born with and it’s a shame that even the most enthusiastic shower-singers can be too embarrassed to let others hear them. We hope that little a support from Auto-Tune will give them the confidence they need.”

Once only available in professional recording studios, Auto-Tune is included with every free download of StarMaker and can be used in two settings: “Hip-Hop” to create that iconic Auto-Tune sound popular in pop and hip-hop songs and “Magic Tune,” which subtly corrects a singer’s pitch. StarMaker’s team of professional musicians painstakingly engineered each song in the app to keep singers on pitch through every key change and accidental note.

The app’s release comes amidst cries from music fans and industry insiders alike that the rampant use of Auto-Tune is diluting the value of true talent. “We understand that sentiment,” says Sedlander. “But hearing an Auto-Tuned recording of yourself singing your favorite song is a lot of fun. What’s wrong with that?”

See a demo of StarMaker with Auto-Tune in action here: http://www.youtube.com/watch?v=cQd7YebUpfQ

StarMaker Interactive is a leading developer of karaoke-style social music apps for iPhone, iPod Touch and iPad. Their flagship app, StarMaker Karaoke, features recordable songs by top artists such as Justin Bieber, Alicia Keys, Elton John and Coldplay, that users can share with friends via Facebook, Twitter, and Email. Their other apps include Auto-Tune Birthday and KIDZ Star USA. StarMaker Interactive was founded in 2010 by a pair of music industry veterans and is headquartered in San Francisco.