A national volunteer project, 4 years in the making, and now published as a peer reviewed scientific study, has discovered that the majority of the US climate monitoring network does not meet technical requirements for long term climate monitoring. Only 1 in 10 NOAA stations were found to meet siting criteria to be free of urbanization encroachment. The study raises questions about the accuracy and certainty of the climate record. 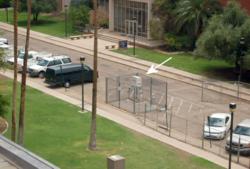 NOAA USHCN climate monitoring station #028815 at the University of Arizona, Tucson. Note the placement of the weather station in the parking lot. Photo by surfacestations.org volunteer Warren Meyer.

The discovery that poor siting of many weather stations used to monitor national temperature trends has led to inaccuracies in the recorded information, says a new study coauthored by climatologist Roger Pielke Sr., of the Cooperative Institute of Research in Environmental Sciences (CIRES) with colleagues from Purdue, Texas A&M, Tuskegee Institute and IntelliWeather. As summarized by Pielke:

"The interpretation of multi-decadal surface temperature trends over the United States has been found to be more complex than has been previously assumed as a result of the use of poorly sited climate reference stations in the analysis.”

Scientists at the National Oceanic and Atmospheric Administration (NOAA) have used the stations in the U.S. Climatology network (USHCN) to measure temperature patterns throughout the nation. In the past decade, however, NOAA has established a new network, the Climate Reference Network (CRN),to measure climate variability and change within the United States going forward. Recognizing that the placement of weather stations can affect the temperatures being recorded—both an area of asphalt or a cooling tower situated near a station would influence the recorded temperature—NOAA adopted siting criteria for their CRN stations: CRN 1 stations are the least vulnerable to being influenced by nearby sources of heat or cooling and CRN 5 stations are the most vulnerable.

These sources and sinks include nearby buildings, parking lots, water treatment plants irrigated lawns, and other such local land features, Pielke said.

To determine how the USHCN stations satisfied the CRN siting criteria and also whether the station siting affected temperature trend characteristics, Pielke and Anthony Watts of IntelliWeather set up the Surface Stations project in 2007. More than 650 volunteers nationwide visually inspected 1007 of the 1221 USHCN stations. The volunteers wrote reports on the surroundings of each station and supplemented these reports with photographs. Further analysis by Watts and his team used satellite and aerial map measurements to confirm distances between the weather station sensors and nearby land features.

The Surface Stations project is truly a citizen scientist project and did not involve federal funding for the study nor the publication of the research paper. It was done entirely with volunteers and donated time.

Analyzing the collected data, the researchers found that only 80 of the 1007 sites surveyed in the 1221 station network met the criteria of CRN 1 or CRN 2 sites – those deemed appropriate for measuring climate trends by NOAA. Of the remaining, 67 sites attained a CRN 5 rating – the worst rating. While the 30-year and 115-year trends, and all groups of stations, showed warming trends over those periods, the scientists found that the minimum temperature trends appeared to be overestimated and the maximum warming trends underestimated at the poorer sites. This discrepancy matters quite a bit. Wintertime minimum temperatures help determine plant hardiness, for example, and summertime minimum temperatures are very important for heat wave mortality. The use of temperature trends from poorly sited climate stations, therefore, introduces an uncertainly in our ability to quantify these key climate metrics.

While all groups of stations showed warming trends over those periods, there is evidence to suggest a higher level of uncertainty in the trends since it was found, as one example, that according to the best-sited stations, the 24 hour temperature range in the lower 48 states has no century-scale trend, while the poorly sited locations have a significantly smaller diurnal temperature range. This raises a red flag to avoid poorly sited locations since clearly station measurement siting affects the quality of the surface temperature measurements.

The inaccuracies in the maximum and minimum temperature trends do matter also in the quantification of global warming. The inaccuracies of measurements from poorly sited stations are merged with the well sited stations in order to provide area average estimates of temperature trends including a global average. In the United States, where this study was conducted, the biases in maximum and minimum temperature trends are fortuitously of opposite sign but about the same magnitude, so they cancel each other and the mean trends are not much different from siting class to siting class. This finding needs to be assessed globally to see if this also true more generally.

However, even the best-sited stations may not be accurately measuring trends in temperature or, more generally, in trends in heat content of the air which includes the effect of water vapor trends. Also, most of the best sited stations are at airports, which are subject to encroaching urbanization, and/or use a different set of automated equipment designed for aviation meteorology, but not climate monitoring. Additionally, the NOAA corrections for station moves or other inhomogeneities use data from poorly-sited stations for determining adjustments to better-sited stations, thus muddling the cleaner climate data. Pielke and colleagues are looking at these issues for a follow-on paper.

The conclusion from Dr. Pielke is that:

“The use of these poorly sited locations has thus introduced an uncertainty in our quantification of the magnitude of how much warming has occurred in the United States during the 20th century."

According to co-author Anthony Watts:

“The fact that NOAA itself has created a new replacement network, the Climate Reference Network, suggests that even they have realized the importance of addressing the uncertainty problem.”

The question that needs to be answered now is; does this uncertainty extend to the worldwide surface temperature record?

Details on the paper are available at Dr. Pielke's website at: