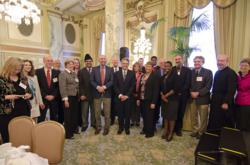 Despite congressional testimony as early as 1988 from preeminent climate scientist James Hansen, and urgent pleas from environmental and religious leaders, Congress has yet to pass meaningful climate legislation.

United States religious leaders, attending the annual meeting of the National Religious Coalition on Creation Care in Washington, D.C., applauded the work of the EPA and its administrator Lisa P. Jackson. In a May event at the historic Willard Hotel, the NRCCC recognized Jackson with its “Steward of Creation Award,” for clean water and clean air initiatives and for having forcefully moved forward under the Clean Air Act to help regulate the atmospheric pollution of CO2 emissions and mitigate the impact of climate change.

Rabbi Warren Stone, NRCCC co-chair stated: “The EPA under Lisa P. Jackson’s strong moral leadership is the most significant voice in our country acting in our interest to mitigate the devastation the atmospheric pollution of climate change and its impact on public health upon the families of our country and our world as well as all creation. We have been hit of late with so-called ‘Black Swan’ disasters — so described because of their magnitude but also because of our surprise when they occur. These recent unanticipated ‘Black Swan” disasters include the tsunami and related nuclear devastation and harmful radiation released from the disaster at Japan’s Fukushima nuclear plants rivaling Chernobyl to the major massive tornadoes destroying 1000’s of homes in Alabama and throughout the Southeast as well as the current historic flooding of the Mississippi impacting and uprooting tens of 1000’s of families. But with the onset of climate change, the severity and increased frequency of at least some of these events is predictable unlike the so-called ‘Black Swan’ devastation and in all cases, the environmental fallout is certain. These events point to our common future, a future in which climate challenges creating devastating food and water shortages will most likely challenge the public health and wellbeing of our all our country and throughout our global community.”

Against this backdrop, the EPA has adopted regulations under the Clean Air Act to put limits on greenhouse-gas emissions. Jackson has said that she and President Obama would have preferred that the limits come through legislation. But efforts to pass such a bill fell apart in the Senate last year several months after the House passed cap-and-trade legislation: “So now we’re left with the Clean Air Act. It’s not the ideal tool, but it is a tool, and according to the Supreme Court it is a tool,” Jackson said, referring to a landmark 2007 Supreme Court decision holding that the EPA can regulate greenhouse-gas emissions under the Clean Air Act upon a finding that the emissions endanger public health and welfare (theHill.com, 4/26/11).

Jackson’s moves have come under sharp attack in Congress, with the coal industry particularly up in arms. In April, the House of Representatives passed a measure trying to prevent the EPA from using the Clean Air Act to regulate the atmospheric pollution of climate change. The same bill failed in the Senate in a 50-50 vote. Aides to President Obama said they would recommend he veto the legislation if it passes. (theHill.com 4/26/11).

The EPA sees faith and neighborhood communities as key to these objectives, announcing in April: “In the history of this nation, faith communities and neighborhood groups have been instrumental in efforts to open new opportunities and improve the world we live in. We are initiating today an effort to connect the talent, energy and enthusiasm we see in faith groups and communities across the nation with the work we are doing at EPA.” At its May meeting and in related meetings with Congressional staffers, the NRCCC welcomed Jackson’s outreach to their communities and heralded her courage and vision.

Bishop Eugene Taylor Sutton, Episcopal Bishop of Maryland: “Lisa Jackson is the first African American to serve as the head of the national government’s agency charged with protecting our air, land and water resources for the benefit of everyone. She has made it a priority to focus on vulnerable groups including children, the elderly, and low-income communities that are particularly susceptible to environmental and health threats. In addressing these and other issues, she has promised all stakeholders a place at the decision-making table. Lisa Jackson is doing God’s work in the world. Her drive, energy and vision for a sustainable earth is a modern testament of the truth that everything is connected, and we all belong to each other.”

Rabbi Warren Stone asserted: “Faith communities in the United States represent the voices of hundreds of millions of persons of faith. National faith leadership including the U.S. Conference of Bishops, the Central Conference of American Rabbis, and The National Religious Partnership for the Environment and a broad array of Christian leadership have recognized the urgent need for bold action on clean air, clean water and climate change. The very health of children, families and elders will be impacted as well. Yet despite congressional testimony as early as 1988 from preeminent climate scientist James Hansen, recipient of last year’s NRCCC award, and urgent pleas from environmental and religious leaders to push forward on an issue of critical importance to humanity’s future, Congress has yet to pass meaningful climate legislation.”

Imam Nasim Mahdi: “We must not despair or give up our efforts to stop and turn back environmental damage despite how difficult the task may seem.”

Rabbi Fred Dobb, active board member of Greater Washington Interfaith Power & Light: “People of faith have rich traditions which should place us among Creation’s most passionate defenders. Somehow, despite strong statements from religious leaders and much scholarship at the intersection of religion and ecology, the message hasn’t sufficiently gotten through. Let us care for Creation because Earth and all its inhabitants, human and non-human, today and in the future, deserve no less.”