On the Path LLC (http://onthepath.com) has released the first in a series of lessons on Folk Rock Guitar by celebrated guitarist and singer-songwriter, Richard Thompson. In the challenging 88-minute lesson available exclusively through their best-selling iPad app, “On the Music Path,” Thompson breaks down the essential elements of his distinctive guitar-playing style and teaches students how to play four of his classic songs: “When the Spell is Broken”, “1952 Vincent Black Lightning”, “The Sun Never Shines on the Poor” and “Beeswing.” The app and the first 7 chapters of Thompson’s lesson can be downloaded for free from Apple’s App Store (http://onthepath.com/AppStore.html). 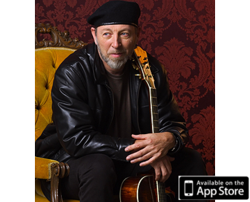 "This is not for beginners, I don’t think" - Richard Thompson

On the Path LLC (http://onthepath.com) has released the first in a series of lessons on Folk Rock Guitar by celebrated guitarist and singer-songwriter, Richard Thompson, for their best-selling iPad app, “On the Music Path.” In the challenging 88-minute lesson for intermediate to advanced guitar students, Thompson breaks down the essential elements of his distinctive guitar-playing style—including his use of hybrid picking, left-hand trills, crosspicking and double stop bends—and teaches students how to play four of his classic songs: “When the Spell is Broken”, “1952 Vincent Black Lightning”, “The Sun Never Shines on the Poor” and “Beeswing.” The lesson includes over 25 practice sessions accompanied by both musical notation and guitar tablature synchronized to Thompson’s demonstration and the opportunity to play along with the man Rolling Stone Magazine called, “the Thinking Man's Guitar God” and “a perennial dark-horse contender for the title of greatest living rock guitarist.”

The “On the Music Path” iPad app offers carefully structured lessons on how to play the guitar, piano, drums and bass from a star-studded cast of world-renowned musicians. In addition to Thompson, teachers include Jackson Browne, Michael Chapdelaine, Vonda Shepard, Leland Sklar, Lee Ritenour, Steve Ferrone and Ravi Shankar. Lessons cost between $4.99 and $19.99 and include 45-90 minutes of one-on-one lesson time with a master musician accompanied by musical notation, chord charts, lyrics and guitar tablature synchronized to the teacher’s playing. The app includes lessons for all levels of students, from novice to advanced, and is available exclusively through Apple’s App Store (http://onthepath.com/AppStore.html). Students can download the app and try out the first few chapters of any lesson for free (including the first 7 chapters of Richard Thompson’s lesson).

In a preview of the lesson released by On the Path LLC on their web site (http://onthepath.com/RichardThompson), Thompson explains that his lesson series will cover “a lot of ground” and “almost every kind of acoustic guitar-playing” but admits that the lessons are “probably for the more advanced guitar player.” “This is not for beginners, I don’t think,” he adds in his characteristically understated fashion.

In fact, Thompson’s lesson will present a formidable challenge for even the most advanced guitarists. In one exercise, for example, Thompson plays an eighth note pattern on the bass strings, a triplet pattern in the high strings all while performing a trill with the left-hand. “Richard certainly gives a monster lesson,” says On the Path founder, Alan Kozlowski. “But the beauty of the lesson is that Richard is such a great teacher that even less advanced students will be able to learn how to play his songs and can grow into the more advanced techniques at their own pace.”

ABOUT RICHARD THOMPSON
Richard Thompson's formidable, genre-defying guitar style has earned him immense, worldwide acclaim. Named by Rolling Stone Magazine as one of the Top 20 Guitarists of All Time, Thompson has also won some of industry’s most coveted awards, including the 2010 Mojo Les Paul Award, the Orville H Gibson Award and the BBC Lifetime Achievement Award. “In the guitar god firmament,” the Daily Mirror writes, “Thompson easily takes a place beside Eric Clapton and Jimmy Page. He has certainly been the most consistently imaginative English plank spanker of modern times.”

ABOUT THE APP
The On the Music Path app has been a top-ranked app since its initial release at the end of April and has garnered 5-star reviews from users and critics alike. “On the Music Path has to be one of the most ambitious iPad apps for guitarists built yet,” extols Fretboard Journal. “Every once in a while a product comes along that is so well done, so well thought out, that it takes a little time to realize just how special it is,” writes one user. On the Music Path is presently one of the top 10 most downloaded iPad apps in Music in the U.S. and is featured as a “New and Noteworthy” and/or “What’s Hot” app in over 100 App Stores worldwide.