Elizabeth Lesser will speak and receive an honorary doctorate from the Institute of Transpersonal Psychology (ITP) at its commencement ceremony on June 18, 2011 at Gunn High School’s Spangenberg Theater in Palo Alto, CA. Lesser is the New York Times best-selling author of "The Seeker’s Guide" and "Broken Open: How Difficult Times Can Help Us Grow." Also a regular speaker and host on Oprah Radio, her recent work includes helping Oprah Winfrey produce the 10-week webinar for Eckhart Tolle’s book, A New Earth. 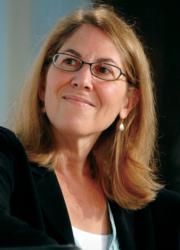 ITP’s new president, Dr. Neal King, expressed his excitement: “We are thrilled to welcome such a widely recognized and effective role model for healing self and healing society."

Co-founder of Omega Institute, a life-long learning center focusing on health, wellness, spirituality, creativity, and social change, Elizabeth Lesser has worked for more than 30 years with leading figures in the fields of healing – healing self and healing society. For much of that time, Lesser was a driving force at Omega Institute, helping to lead the organization, create the curriculum, and spearhead many of its programs, including the Women and Power conferences, which offer a dialogue between women in leadership positions in a variety of areas—government, religion, media, the arts, and more. Today, she is an active board member and advisor to the organization.

ITP’s new president, Dr. Neal King, expressed his excitement: “We are thrilled to welcome such a widely recognized and effective role model for healing self and healing society. Elizabeth Lesser is a living embodiment of the kind of global consciousness combined with selfless community engagement that we at ITP value and promote among our student, faculty and alumni community.”

A student of the Sufi master, Pir Vilayat Inayat Khan since 1971, Elizabeth has also studied with spiritual teachers and religious scholars from other traditions, as well as psychological practitioners and healers. Her first book, The Seeker’s Guide, chronicles the uprising of a new global spirituality that she participated in and researched through her work at Omega. Her second book, Broken Open, is a guide for anyone going through a difficult time. Its real life stories inspire the reader to use adversity for inner growth. Broken Open has been translated into 16 languages.

Lesser attended Barnard College and San Francisco State University and is formerly a midwife and birth educator. She has taught workshops on emotional intelligence, meditation, women’s issues, and death and dying, and has appeared on national radio and television, and lectured at college campuses, retreat centers, and conferences nationwide. She has been active in local environmental issues for many years in New York's Hudson Valley, where she lives with her husband. She is the mother of three grown sons.

About The Institute of Transpersonal Psychology
The Institute of Transpersonal Psychology (ITP) is a private, non-sectarian graduate school accredited by the Western Association of Schools and Colleges. For over 30 years the Institute has remained a leader at the forefront of psychological research and education, probing the mind, body, spirit connection. ITP’s challenging and transformative educational program attracts students from around the world.