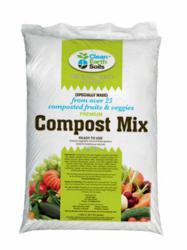 "When a gardener uses a cubic foot of EcoScraps' compost, it is like parking a car for one month because of the amount of greenhouse gases that are reduced," said Brandon Sargent, EcoScraps' co-founder.

In their first year of business, EcoScraps recycled over three million pounds of food waste that created 100,000 cubic feet of compost.

EcoScraps collects fruits and vegetables such as tomatoes, cucumbers, oranges and grapefruits from food banks, grocery stores and distributors in Arizona, Utah and Colorado. They use this produce to create organic compost. It is then sold to gardeners throughout the United States.

“Restaurants give their customers too much to eat,” said Daniel Blake, EcoScraps’ co-founder. “Most people don’t realize that when they leave leftover food on their plate, it is usually sent to a landfill to rot.”

When food rots in a landfill, it creates methane gas, which is 20 times more harmful than CO2. EcoScraps would like to stop this cycle by using spoiled fruits and vegetables to create organic compost, which is healthier for the soil.

“When a gardener uses a cubic foot of EcoScraps’ compost, it is like parking a car for one month because of the amount of greenhouse gasses that are reduced,” said Brandon Sargent, EcoScraps’ co-founder. “Our goal is to improve the environment by composting, which puts less food in landfills, improves our air quality, and puts much needed nutrients back into our American soil.”

EcoScraps sells their compost under the names of Harvest Plenty Plenty and Clean Earth Soils throughout the U.S. The organic compost can be purchased online at http://www.harvestplenty.com or http://www.cleanearthsoils.com.

EcoScraps began in 2010 when Blake, 22 at the time, was eating at all-you-can-eat breakfast with his brother. The two brothers were surprised at the amount of food that was thrown away. On their way home, they talked about ways they could utilize this waste and create a business.

“In the early days of EcoScraps, I went dumpster diving to find food scraps to experiment with,” said Blake. “I chopped and blended the scraps and later composted them in garbage cans in my parking lot. After numerous experiments with various, all-natural ingredients, a successful formula was developed that had nearly double the nutrients of chemical based soils, and an environmentally friendly compost was created.”

About EcoScraps
EcoScraps is an organic soil manufacturer that was established in 2010. EcoScraps recycles food waste into a nutrient-rich soil conditioner. EcoScraps products enrich the soil, which help gardeners grow healthier plants in the most environmentally friendly way. Products do not contain manure. Through this process they are able to reduce landfill waste and methane emissions. EcoScraps has won several awards such as the 2010 Sparkseed Innovator, 2010 SOCAP Scholar, #2 Emerging Student Company, Utah Student 25, and 2nd place and audience award winner at the BYU SVC 2010 Competition. Visit ecoscraps.net or call 801-362-5362 for more information.

Harvest Plenty Compost MixIt is the only commercial, organic compost that does not contain manure. With no animal by products, it is safe for use in vegan gardens.

Clean Eath Soils Potting SoilIt is a special blend of composted fruits and veggies to provide the nutrients your plants need to grow as well as coco peat and perlite to help with water retention.