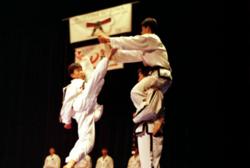 From June 11 through June 14, 2011, a 17-member North Korean Taekwon-Do delegation will travel and perform in Boston, MA, New York City, and New Jersey, for their 2011 TKD Goodwill Tour. Spearheaded by Grandmaster Woo-Jin Jung, a US citizen, it is a cultural exchange to promote peace between North Korea and the USA. Filmmaker, Luan Van Le, has been following Jung’s efforts for the feature documentary called “Tong-il” which covers Jung’s biography as well as the first 2007 North Korea/USA TKD Goodwill Tour.

The Korean War ended in 1953 with an armistice backed by the USA on the South Korean side and the Soviet Union on the North Korean side, leaving the peninsula divided to present day. The absence of a peace treaty leaves all parties in a technical state of war and hostilities. Through 2010, the diplomatic relationship between the USA, South Korea, and North Korea dove to an all time low and hinges on North Korea’s feared nuclear weapons program. Since the relationship between the USA and North Korea are vital to any eventual peace and reunification of the Korean peninsula, the TKD Goodwill Tours are efforts to help jumpstart diplomatic endeavors through non-governmental people-to-people exchanges. The practice of Taekwon-Do espouses building a more peaceful world and Grandmaster Jung strives to exemplify the philosophies taught through this Korean martial art.

Luan Van Le was given permission by the North Korean government to travel and film in North Korea in June of 2007 and was given exclusive access to film the North Korean delegation through the October 2007 TKD Goodwill Tour, which traveled to Los Angeles, San Francisco, Cedar Rapids, IA, Louisville, KY, and Atlanta, GA, over two weeks. The 2011 tour is meant to introduce the North Koreans to new cities and audiences. LUV Films, the company responsible for the production of “Tong-il,” will be on-hand to record the New York segment. The documentary “Tong-il” is currently in the editing and post-production phase and is set to be finished this summer.

To learn more about the documentary go to http://www.tong-ilmovie.com and to attend the June event visit http://www.usnktkd.com.

Luan Van Le is the producer and director of LUV Films, an independent film production company based in Dallas, TX, which is in the process of making two feature-length documentary films revolving around the martial art of Taekwon-Do.