The White House may never reveal the identity of the Navy Seal who killed Osama Bin Laden, but a comic publishing company promises to immortalize one lucky auction winner as the man who pulls the trigger on the fatal shot. 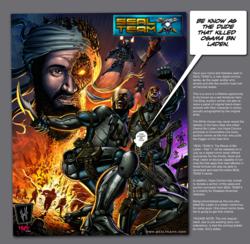 "Sworn to protect the Country, trained to save the world." -Seal Team X

The White House may never reveal the identity of the Navy Seal who killed Osama Bin Laden, but a comic publishing company promises to immortalize one lucky auction winner as the man who pulls the trigger on the fatal shot.

“SEAL TEAM X”, a new digital comics series created by Hype Comics founder and CEO, Scott Ownbey, along with bestselling author, Mark Yoshimoto Nemcoff, will offer an action-packed, blockbuster storyline that begins with that fateful raid on the Al Qaeda leader’s compound in Abbottabad, Pakistan. An Ebay auction has been set up by Hype Comics to pick one winner, whose name and likeness will be used as the super soldier who shoots and kills the world’s most-hated terrorist leader.

“This is a once in a lifetime opportunity to be known as a real American hero,” says Ownbey, a five-year U.S. Navy Reserve veteran. “The auction winner will also receive a panel of original hand-drawn artwork with their character in action, proudly autographed by the original artist.”

“The pulse-pounding action of the Abbottabad mission is just the tip of the iceberg,” claims Nemcoff, whose book, “The Killing of Osama Bin Laden” became a fixture on Amazon’s top 100 non-fiction bestseller list. “When you learn the nature of what SEAL TEAM X does to protect the world from total Armageddon, it will blow your mind.”

The auction begins June 13th, 2011 and runs for 10 days through June 23th. Hype has set the minimum starting bid at $99. “Anybody is welcome to bid,” states Ownbey. “The only requirement, due to pre-existing story considerations, is that the winning bidder be male.”

“SEAL TEAM X: The Blood of Bin Laden - Part 1” will be released in August as a digital comic book offered exclusively for the Kindle, Nook and iPad. Users of devices capable of running the free apps that read eBooks in those formats will also be able to download and read the entire SEAL TEAM X series, promises Ownbey.

In addition, Hype Comics has vowed to donate a portion of the sales proceeds from SEAL TEAM X to http://www.dav.org, a charity for disabled American Veterans. “Superheroes exist in comic books,” says Ownbey, “But let’s never lose sight that the men and women in uniform who serve this country are the real action heroes of this world.”

“Being immortalized as the one who killed Bin Laden is a dream come true for some guys,” notes Ownbey. “One proud comic book fan is going to get that chance.”

Hype comics will debut “Seal Team X: The Blood of Bin Laden” in a new digital app that will allow readers to mash-up the storyline and share it with friends through email or Facebook. “ This is a revolutionary concept and the first phase of what we plan on doing to take comic books to into the next generation. We want to combine cutting edge artwork and storylines with the ability for readers to meet,share and mash-up interactive content.”

Take a look insdie of Seal Team X in action.This Seal Team X two page speard is just the tip of the ice berg for this action packed comic.