RightOnline, Smart Girl Summit, And The Redstate Gathering To Feature the Film At Their Major Events. Andrew Breitbart to Introduce Film At RightOnline Conference with Speech; ”The Battle For The Soul Of The Conservative Movement And The Republican Party" 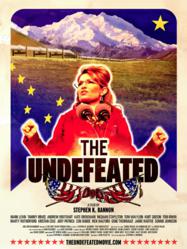 “Being a conservative woman in politics is not easy, and we are certain The Undefeated will serve to rally our attendees as we push toward electoral victory in 2012. Showing the film at this years Summit is both exciting and important,”says Stacy Mott.

Victory Film Group today announced The Undefeated, which chronicles Sarah Palin’s rise from obscurity to national prominence, will screen for select audiences at several upcoming events including; for bloggers at The RightOnline Conference in Minneapolis on June 17th; for conservative women activists at the Smart Girl Summit in St. Louis on July 30th , and the RedState Gathering in Charleston, SC on August 12th.

At the RightOnline Conference, Andrew Breitbart will introduce the film with a speech.

"The center-Right is taking a closer look at Sarah Palin as she is getting high profile attention for her nationwide bus tour, release of emails, and overall political positioning. This film takes an unvarnished look at a woman that leaves the mainstream media in her dust and makes no apologies," said Tim Phillips, president of Americans for Prosperity and president of Americans for Prosperity Foundation.

"I’m pleased to screen The Undefeated at AFP Foundation’s RightOnline conference this Friday, and allow hundreds of free-market activists to learn the real story behind Palin’s political career," he added.

“Showing The Undefeated at this year’s Smart Girl Summit is both exciting and important,” says Stacy Mott, president of Smart Girl Politics. “Sarah Palin has been a huge inspiration to a new generation of conservative women activists and we pay tribute to that by showing the film at our annual conference,” she adds. “Being a conservative woman in politics is not easy, and we are certain The Undefeated will serve to rally our attendees as we push toward electoral victory in 2012.”

"Sarah Palin connects with grassroots conservatives in a way few others do. The RedState Gathering is an annual gathering of authentic grassroots conservatives. Showing The Undefeated to this audience is a natural fit, particularly as RedState's readers continue to support and love Governor Palin,” said Erick-Woods Erickson, editor, RedState.com

“We are very excited about screening The Undefeated for these select audiences,” says Stephen K. Bannon. "There is a battle for the soul of the Conservative movement and the Republican Party and it is most important to bring this film to these influential activist audiences."

“We believe that Governor Palin’s story of rising from obscurity to national prominence and taking on both the right and the left will inspire the audiences at The RightOnline Conference, the Smart Girl Summit, the RedState Gathering, as well as audiences nationwide when the film opens July 15th,” said Glenn Bracken Evans.

The Undefeated will premiere in Iowa, New Hampshire, and South Carolina in late June and early July, and the film is slated for a nationwide theatrical release beginning July 15th at AMC theatres. Cinedigm Digital Cinema Corp. (NASDAQ: CIDM), a full-service theatrical distributor specializing in digital cinema, is managing the theatrical release and ARC Entertainment has taken on worldwide distribution responsibilities for the project.

The Undefeated has been called:

About Victory Film Group
Victory Film Group develops, produces and distributes documentaries and films that address today’s leading political, socio-economical and cultural issues while incorporating the conservative perspective. Victory Film Group’s motion pictures are considered amongst critics to be one of the best conservative-themed collections in film history. http://www.victoryfilmgroup.com
For More Information: