Death of an American Hero - Roselle The 9/11 Guide Dog

9-11 Hero and Guide Dog, Roselle passed away on Sunday, June 26, 2011 at the age of 13, surrounded by her loving family, Michael and Karen Hingson. Roselle safely guided Michael Hingson and others down 78 floors of the World Trade Center moments before it collapsed. A book about her life is being released soon. 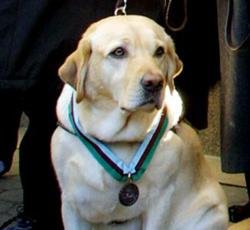 I would not be alive today if it weren't for Roselle

Roselle and Michael Hingson first met on November 22, 1999 at Guide Dogs for the Blind. Although blind from birth, Michael Hingson earned a Master’s Degree in Physics from the University of California, Irvine and has always competed successfully in a sighted world. Roselle was Michael’s fifth guide dog and according to Michael “It was obvious from our very first walk together that we were a perfect match.” The teamwork that Michael and Roselle developed would come to the ultimate test.

On September 11, 2001 Michael Hingson and Roselle were in their office on the 78th floor of Tower One of the World Trade Center when it was struck by American Airlines flight 11, hijacked and under terrorist control. Working as a team, Roselle led Michael, along with the others on their floor, down the darkened stairwell to safety moments before the building collapsed.

Their amazing story has inspired people around the world and is the subject of a new book called “Thunder Dog: The true story of a blind man, his Guide Dog, and the triumph of trust at Ground Zero.” Co-authored by Michael Hingson and Susy Flory, the book will be available soon in bookstores, Amazon and on http://www.michaelhingson.com

“I would not be alive today if it weren't for Roselle,” Michael states with gratitude. “Roselle did an incredible job and is a true hero. She remained poised and calm through the entire day, giving kisses and love wherever she could, while working valiantly when she needed to do so. Roselle’s service on 9/11 was a testimony not only to the Sterns and the others who raised her, but to her trainer, Todd Jurek, the entire Guide Dogs for the Blind training staff, and all the people who make up that wonderful organization. Most of all, what Roselle did that day and in fact every day she and I were together is nothing less than the most powerful evidence I can provide of the enduring value of trust and teamwork.”

In the aftermath of 9/11, in January 2002, Roselle began accompanying Michael who left a long career in high tech computer sales to serve as the National Public Affairs Director for Guide Dogs for the Blind, based in San Rafael, CA. Roselle and Michael spent countless hours speaking to the media, including appearances on Larry King Live, interviews with Regis and Kelly and the CBS Morning Show, even riding on a float in the 2002 Rose Parade on New Year's Day. Roselle and Michael traveled hundreds of thousands of miles throughout the United States and the rest of the world speaking about trust and teamwork, guide dogs, and blindness. Their goal was to help people understand that the real “handicap” of blindness is not a lack of eyesight but a lack of proper education about blindness.

On Friday, June 24, 2011, Roselle was taken to her vet, who suspected that somehow she had developed a stomach ulcer. As her condition continued to deteriorate, Michael and Karen and Roselle’s doctor came to the painful conclusion that the best thing they could do to help Roselle was to end her suffering.

Roselle passed at 8:52 on Sunday night.

Michael, although deeply saddened by her passing, is grateful for his time with her: “Roselle worked with me through the most trying time in our nation’s history, and she was right there unflinching for all of it.

In addition to the soon-to-be-released book, “Thunder Dog,” Roselle has inspired the formation of “Roselle's Dream Foundation,” which has been in development for several months. The purpose of the foundation is to educate people about blindness, and to assist blind children and later blind adults to obtain new technologies to empower them to learn, work and engage in life more fully. Donations can be made in Roselle’s memory at: http://www.rosellefoundation.org

Michael Hingson is president of the Michael Hingson Group and is an international speaker on trust, teamwork. For more information or to book Michael, you can call (415) 827-4084 or e-mail Michael at info(at)michaelhingson(dot)com