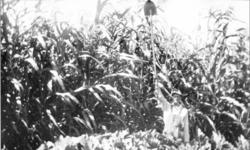 Walter Knott once grew corn at Knott's Berry Farm, today it is a theme park boasting 165 rides, shows and attractions.

"if it were not for the family farm, and later the family restaurant, we would not hove Knott'sTheme Park today," Marty Keithley, Knott's general manager.

Knott's Berry Farm Theme Park will have guests grinning from ear to ear as they attempt to set a record for the largest number of people husking corn on Thursday, July 14 at 2:30 pm.

"Knott's Berry Farm chose a corn husking event because it really takes us back to our roots as a farm,” says Marty Keithley, Knott’s Berry Farm’s general manager. “Knott’s Berry Farm founders Walter and Cordelia Knott came to Buena Park in the 1920’s to make a living farming, and for a time corn was one of their crops.”

Today the park offers over 165 rides, shows and attractions, though it still offers corn in the famous Mrs. Knott’s Chicken Dinner Restaurant.

“If it weren’t for the family farm, and later the family restaurant, we would not have Knott’s Berry Farm Theme Park today,” added Keithley.

The opportunity to be a part of the Guinness Book World Record Event will be open to all paid park guests on the 14th, as space allows.

“To set the record we need to have at least 250 people husking corn at one time, “ said Knott’s Berry Farm spokeswoman Jennifer Blazey, “but we will be prepared for as many as 500 participants.”

To sign up in advance for the event, send an e-mail to pr(at)knotts(dot)com and place “corn husking” in the message line. The event will take place in Knott’s Calico Square at 2:30 pm.

To find out all Knott’s has to offer this summer, visit http://www.knotts.com.