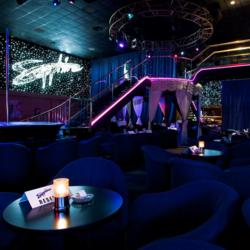 Thursday night July 07, 2011 Sapphire Gentlemen's Club was visited by Meghan McCain, daughter of Senator John McCain of Arizona and Michael Ian Black - actor, comedian from Comedy Central, and writer to conduct research on heir joint effort book about “Life In America” as seen from a Conservative Republican & Liberal Democrat point of view. The group, which included Poker Pro Phil Gordon spent several hours on a tour given by Sapphire owner Peter Feinstein and a group of entertainers that included Daisy Delfina. The group enjoyed the in depth experience at Sapphire, and were intrigued about the business of the club. McCain and Black are now headed to Salt Lake City for a different venue experience.