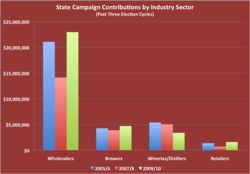 The just released report, “Toward Liquor Domination,” outlines the extraordinary amounts of money wholesalers spend to retain their influence in state capitals and in Washington, D.C.

A new report issued today by the Specialty Wine Retailers Associations shows that wine wholesalers have spent more than $82 million dollars on state and federal campaign contribution and federal lobbying over just the past three election cycles from 2006 through 2010. The amount dwarfs that spent by the rest of the alcohol industry and came in advance of wholesalers’ current attempt to pass radical legislation in Congress that would benefit only the wholesale tier of the alcohol industry.

The just released report, “Toward Liquor Domination,” outlines the extraordinary amounts of money wholesalers spend to retain their influence in state capitals and in Washington, D.C. and to assure policies specifically protecting the wholesaler from competition are retained and advanced.

The new 17-page report can be found online at: http://www.specialtywineretailers.org/documents.html

POLITICAL SPENDING PUTS WHOLESALER AGENDA IN FRONT OF CONGRESS
“When you look at these kinds of expenditures by wholesalers over such a short time period, it’s not hard to understand why they are currently pushing federal legislation that would prohibit judicial challenges to archaic, constitutionally questionable and discriminatory laws the benefit only the wholesaler,” said Daniel Posner, Board Member of the Specialty Wine Retailers Association. “House Resolution 1161, now currently awaiting hearings in the House Judiciary Committee, would assure that alcohol policy is dominated by wholesalers in the legislative venues they control via enormous campaign contributions and lobbying.”

The new report shows that since 2006, alcohol wholesalers have spent nearly $60 million in campaign contributions at the state level alone. This is nearly double the amount that wineries, distillers, brewers and wine stores have contributed combined.

THE KEY POINTS IN “TOWARD LIQUOR DOMINATION”:

ABOUT SPECIALTY WINE RETAILERS ASSOCIATION
SWRA is a national organization of wine retailers, associated businesses and supporters of fair trade that seek a well-regulated and fair market for the sale and distribution of wine. For more information: http://www.specialtywineretailers.org

Download "Toward Liquor Domination" Report Profiling How Alcohol Wholesalers in America Control Alcohol Laws And Regulations in D.C. and the 50 States