Gilbert Marosi, Artist, Re-Energizes the Paintings of Frida and Diego, the Mexican Mystics, By Synthesizing Their Masterworks into Original and Dazzling Compositions

No one can imitate or even emulate Frida and Diego, but Marosi has blended the masterworks of both in a magical interpretation. Interpretations which evoke the tortured and tragic life of Frida Kahlo, and the immortal paintings of Diego Rivera which bring back to life the ancient civilization of the Aztecs. The resulting compositions are unique to Marosi and fuse Frida's and Diego's vision into totally hypnotic concoctions. 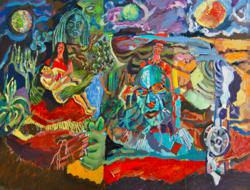 Frida Kahlo's life was inextricably linked to the artistic giant, both figuratively and physically, Diego Rivera. As an artist himself, Gilbert Marosi deeply admires the mastery Frida has in surrealistically depicting her tragic life, thus exorcizing the demons which would have consumed her otherwise.

Diego's vivid representation of the daily life of the Aztecs transport one to a tranquil era when the Aztecs reigned supreme in the land of their ancestors the Toltecs.

In the painting "Frida and the Monkey," Marosi pictures a Frida totally engrossed in cradling a monkey, which may represent an innocence only granted to animals. The vivid colors are typical of Latin American architecture.

The painting "Frida cradling Diego," it is a surreal world which Frida inhabits. The moon shines in a dark sky, Cactus grow out of the fertile Mexican soil. A portrait of Frida in Turquoise looms enigmatic over a blood red plain. A mysterious Green goddess looks out into eternity, perhaps.

The complete series may be seen in Frida

Frida and the Monkey

The day of the dead