New advances in minimally invasive surgical techniques mean you can get rid of your pain without the trauma of elaborate spinal surgery—and be back on your feet in a matter of weeks, not months. One of the most promising types of back surgery is XLIF, or eXtreme-Lateral Interbody Fusion, says Kaixuan Liu MD, PhD, chief surgeon at Atlantic Spinal Care in Edison, N.J., and an expert in the cutting-edge technique. 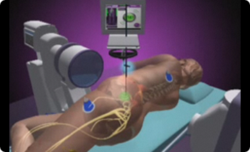 “If you’ve got chronic back pain, you’ve probably thought about surgery at least a thousand times (once for every time it seemed you’d be suffering like this for the rest of your life). But the prospect of spinal surgery is, for most people, a scary scenario: Who wants to go through a painful operation that will leave you with months of recovery time and scars that will last a lifetime?” says Kaixuan Liu MD, PhD, chief surgeon at Atlantic Spinal Care in Edison, N.J.

But new advances in minimally invasive surgical techniques mean you can get rid of your pain without the trauma of elaborate spinal surgery—and be back on your feet in a matter of weeks, not months. One of the most promising types of back surgery is XLIF, or eXtreme-Lateral Interbody Fusion, says Dr. Liu, an expert in the cutting-edge technique. “Don’t let the word “extreme” scare you,” Dr. Liu says. The technique is called “extreme-lateral” because the surgeon operates on your spine through a small incision on your side (the extreme-lateral side of your body), not your abdomen (anterior side) or back (posterior side), he explains. It’s an “interbody” procedure because it addresses the area between the bones (vertebrae or discs) in your spine.

XLIF procedures can be used to treat many conditions, including degenerative disc disease in the lumbar spine (the five vertebrae in the lower back), low-grade spondylolisthesis (a condition in which one of the vertebrae in the back slips out of position), degenerative scoliosis (curvature of the spine), and recurrent lumbar disc herniation (a condition in which the gel-like center of one or more of the discs in your spine has bulged or broken through the disc’s tough outer membrane). In most XLIF surgery, the surgeon will remove an intervertebral disc and fuse the space with a modern implant, which helps stabilize and maintain the spine’s natural shape and help it heal.

Fusion—Only Better
Spinal fusion surgery has been around since the early 1900s—it was originally developed to correct spinal deformities caused by tuberculosis, and has since become a widely accepted surgical treatment for many kinds of back pain. But the new XLIF procedure is far superior to older techniques, for several reasons, Dr. Liu explains.

For starters, he says, XLIF is minimally invasive—it uses very small incisions, typically less than half an inch long, instead of the single large incision that’s required in traditional “open” spinal surgery. It also uses x-rays, which allow the surgeon to see what he or she is doing without spreading apart the muscles and other tissues surrounding the spine (that spreading is responsible for much of the post-op pain and lengthy recovery times associated with traditional spinal operations). The incisions are fitted with small dilator tubes that allow the surgeon to remove the damaged disc (or other material) and perform the fusion without creating unnecessary trauma to the surrounding area. XLIF also uses an advanced nerve monitoring system that provides accurate, reproducible, real-time feedback about nerve health, location, and function, reducing the chances of nerve injury.

“From the patient’s point of view, the differences between XLIF and traditional spinal fusion are enormous,” Dr. Liu says. Instead of a three- to five-day hospital stay, many patients can go home right away. They’re also typically up and walking the same day—vs. being immobile for two to four days with traditional fusion. “With XLIF, you can resume your normal activities in four to six weeks, in most cases,” he says. “That’s a big advantage over the six months-plus that you’d have to wait with a traditional operation.”