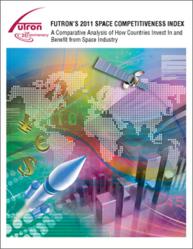 The 2011 results show that even as countries collaborate in space, competition has intensified. Dominant actors are losing ground to a rising middle tier of space players, and the competitive gaps separating all nations are narrowing.

Futron’s Space Competitiveness Index (SCI), an independent study, compares 10 leading space-participant nations across more than 50 individual metrics that together reflect three overarching competitiveness drivers: government, human capital, and industry. By evaluating these metrics, the Index numerically benchmarks the relative space competitiveness position of each nation. This framework allows policymakers and enterprises to pinpoint space-related strengths and weaknesses for each nation, understand how each country invests in and benefits from space industry, and make informed decisions based on the changing dynamics of global space competitiveness.

The United States remains the overall leader in space competitiveness, but its relative position continues to decline as other countries enhance their capabilities while the U.S. undergoes major transitions, particularly in the arena of human spaceflight.

Europe combines integrated space activity with individual country efforts, which have proliferated through the formation of new national space initiatives across the continent—from the United Kingdom to the Czech Republic to Estonia—as well as more assertive space export financing.

Russia continues to lead the world in launches, and is poised for increased activity, with a vital role transporting astronauts and cargo to the International Space Station, as well as the introduction of Soyuz launches from the European spaceport at Kourou.

China performed a record number of launches in 2010, matching the United States for the first time, while increasing investment in technical education programs and civilian research institutes.

Japan has strengthened its competitive position through space policy reforms that continue to filter through government and industry. But in the 2011 results, these gains were not enough to maintain Japan’s position relative to China’s rapid ascent.

India, one of only two countries to leapfrog positions in the 2011 results, is enhancing its space-related technical education in pursuit of next-generation launch goals.

Israel offers niche entrepreneurial strengths, but is challenged by a lack of domestic industry scale and difficulty sustaining a commercial space presence in global markets.

Brazil has begun to re-examine its national space priorities, expanded its international partnerships, and laid plans for a new launch vehicle. It remains to be seen whether these steps will keep Brazil ahead of other countries in the region that also are emerging onto the space scene.

The Executive Summary for the 2011 SCI is available for complimentary download. To learn more about this report, visit http://www.futron.com/SCI_2011.xml.

Futron Corporation is a premier provider of decision management solutions that improve outcomes for our clients by enhancing their ability to make complex choices. Our proprietary analytic models, methodologies, and data repositories transform information into intelligence. Our multidisciplinary, world-class team offers comprehensive knowledge and deep experience in statistical analysis, competitive assessments, forecasting, and strategy. Founded in 1986, Futron has an expert staff including policy analysts, management leaders, economists, regulatory specialists, and engineers. Futron is headquartered in Bethesda, Maryland with offices in Houston, Texas and Hampton, Virginia.