Texas cattle ranchers Rick Reeves and Bobby Campbell are using SweetPro supplemental lick blocks made from distillers' grains to maintain herd health during one of the worst summer droughts in history. While other ranchers have been forced to sell off cattle due to poor forage conditions, cattle operations using the supplements are holding on. 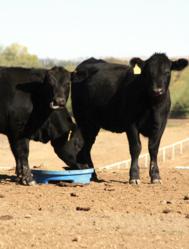 These newer "free choice" blocks are not made from molasses, but from protein rich distillers' grains.

The headlines all across cattle states have been telling the story of Summer 2011: "Texas farmers and ranchers fear record loss", "Cattlemen feeling the heat as drought expands", "Cattle need special care during summer's drought". But some Texas cattlemen like Rick Reeves and Bobby Campbell have managed to combat the drought by keeping their cattle on SweetPro supplemental lick blocks.

Summer droughts aren't unusual, but this year's is amazingly widespread. In an August 2011 article by chron.com, the head of Texas' agriculture extension service said ". . . this one is more extreme and striking 90 percent of the state". The Houston news source also reported that a Waller County extension agent said "It already has produced one of the hottest summers and the driest 12-month periods ever recorded in the state". And climatologists can't say this weather pattern won't be a problem next year or for years to come.

Even when ranchers have enough water for their cattle, their grass forage conditions are often so depleted in protein, minerals and vitamins that the herds are barely surviving. This has led many ranchers to sell off young cattle early, wean calves early, lose breeding stock, or choose expensive feed and freight measures that will hurt them in the short and long term.

But in east Texas, cattle ranchers have been able to keep their herds in better shape than others, while needing less hay than neighboring ranches. Rick Reeves, a Hallsville, Texas distributor of cattle and horse lick blocks by SweetPro, has seen his clients' cattle come through the drought needing less forage, maintaining good body condition and getting some healthy weight gains.

Bobby Campbell works with Reeves, and also runs his own herd of Angus-Brahman cattle in eastern Texas. Campbell said that even with the drought, "We've had weaning weights right around 600 lbs at 6 months" by using supplemental lick blocks year 'round for the cow-calf pairs. "We feed our cattle just 2 hours a day on hay. They're not over-consuming, not hungry, they're content and laying down in the shade".

A recent North Dakota State University report titled "Drought Management Strategies for Beef Cattle" pointed out "Pastures and native range that are dormant due to drought conditions may be low in vitamin A, phosphorus, and protein". One key option the study recommends is to "Supplement low-quality feeds correctly" with choices including "commercial protein blocks, . . . and tubs".

Some supplemental feed blocks for cattle offer "all-in-one" approaches that make it easier for ranchers to be sure their herds get the protein, minerals and vitamins that native grasses can't always supply, especially during drought. Cattle sense what's deficient in their diet and only consume amounts of the lick blocks needed to restore metabolic balance. Ideally about a pound a day.

These newer "free choice" blocks are not made from molasses, but from protein rich distillers' grains. By offering a variety of blocks with adjusted ingredient levels, the right block can be selected to match the forage conditions. Fermented digestive aids and prebiotics in these blocks also help cattle use the available forage up to 25% more efficiently. That's critical when grass is scarce.

Extension beef specialist Rick Rasby with the University of Nebraska, wrote that " . . . there are at least 17 minerals required by beef cattle. There are minerals that interact with one another, and therefore, affect their utilization, and these need to be factored into a supplementation strategy".

Drought can rob herds of these naturally occurring minerals and put internal stresses on cattle that are compounded by the physical stresses of severe summer heat. Cattle health suffers, growth rate is reduced and breedback rates drop. All of these cause not only a tough year now, but a challenging recovery as carefully cultivated herd genetics are swept away in survival sell-offs.

The key to maintaining the herds may reside in the switch to the newer style of lick blocks. As cattleman Bobby Campbell noted "Some of our cattle got out yesterday by a dry creek bed. The neighbor called and said 'I know these are your cattle because nobody else's cattle look this good'."