Push notification provider Urban Airship hit an important milestone today, delivering its 5 billionth mobile message. After delivering 1 billion notifications on behalf of its thousands of app developers in a 15-month span, the mobile service provider saw push notification usage increase fivefold in the subsequent 11 months, having delivered another 4 billion messages and alerts since September 2010. The company also hired a CFO. 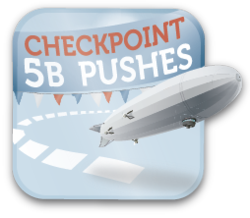 The market is rapidly adopting push notifications as a critical communications channel.

A short two years since Urban Airship formally launched, the company has established itself as a leader in its ability to navigate the complex, multifaceted explosive-growth industry of mobile apps. Push notifications—short, real-time alerts sent from within apps direct to users with the app installed on their device—are quickly joining email, social networking and SMS as a critical communications channel.

Successful brands on mobile are engaging their customers with compelling, relevant information that extends the utility of their app. Several brands, including ESPN, Yahoo, Slate, msnbc.com, dictionary.com, Groupon and LivingSocial use Push to deliver ongoing content such as advertisements, deals and special sales, news stories, podcasts and playlists, weather and traffic alerts, transactional receipts and sports scores.

“I'm amazed at the growth we've seen in such a short time. Our team has delivered on the vision of a ubiquitous messaging layer for any connected device and we're just getting warmed up over here,” says Scott Kveton, CEO of Urban Airship. “The market is rapidly adopting push notifications as a critical communications channel. It’s clear that mobile is changing everything."

App Messaging by the Numbers

The company hits the 5 billion milestone as it embarks on the next phase of its growth. Dylan Anderson is joining the executive team at the company as CFO, VP of Finance and Corporate Secretary. He will oversee strategic growth and help drive capital needs as Urban Airship continues to make traction with significant larger-scale enterprise-scope partners.

Anderson, a seasoned start-up veteran, has more than 18 years of financial and operational leadership in early-stage, innovative companies. He brings strong credentials in fund raising, M&A, and both pre- and post-IPO companies. Most recently he was CFO for Max-Viz, Inc., a VC–backed avionics technology company, where he led the finance, legal, HR and administrative teams.

“Dylan is joining the team at the perfect time,” says Kveton. “As the deals we are doing start to become more and more complex, we need someone intimately familiar with sophisticated revenue models and experience structuring full-service, SLA-level contracts.”