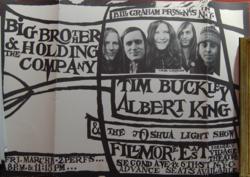 Andrew Hawley, from Vintage Rock Posters, announces his plans to search for Janis Joplin concert posters. Janis Joplin are significant according to Hawley because “Her look and music exemplified the 1960s. She was very photogenic and toured constantly. There are many Janis Joplin concert posters out there to be found.” Hawley adds, “Janis Joplin was a raw talent and a real performer. The performance you got from her reflected how she was feeling at time. It was a cathartic experience for Janis but also for the audience. She wowed them and she still can from live videos of “Summertime” on YouTube.”

A rare Joplin concert poster is for the Fillmore East show with the Big Brother and the Holding Company held on March 8th, 1968. According to Hawley, “Bill Graham was the promoter and was responsible for opening the world famous Fillmore West in San Francisco. Janis Joplin and the Big Brother and Holding Company were the opening act for the Fillmore East in New York. The Janis Joplin black and white poster was designed by Charles Brandywynn and features a photo of Big Brother Band with Joplin. Linda Eastman has a picture credit on the poster. Ms. Eastman later became Linda McCartney.”

Hawley will pay $3,000 for original vintage 1960s Janis Joplin concert posters. Any condition is accepted. Sellers will be paid in cash within 24 hours guaranteed. For more information, go to http://www.vintageconcertposterbuyer.com.