Oklahoma cattle ranchers have been selling off their herds in record numbers this summer, as grasses have gone dry during the 80 straight days of 100+ degree heat in this year's extended drought. But according to SweetPro Feeds, cattlemen like Ronnie Glover from Elgin, Oklahoma are maintaining their herds and looking forward to high profits in Spring, by keeping their cattle on non-molasses lick blocks made from distillers grains. 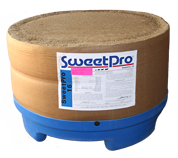 SweetPro cattle blocks are non-molasses, so they won't melt or be over-consumed in Oklahoma's summer heat.

With 1.8 million head of cattle in Oklahoma, the drought of 2011 is having a serious economic impact on the state. Herds that ranchers have spent up to 25 years developing, to achieve the best beef traits, are being sold off to avoid losing them to hunger or dehydration. But lick blocks from SweetPro Feeds have helped the Glover Cattle Company to hold onto their animals by relying on a year 'round supplement program of protein, minerals and vitamins. Their cattle have needed less forage and made better use of the grasses they have, which has been enough to get them through the tough times.

The sale barn that's 11 miles from Glover's ranch would normally sell about 2000 head of cattle per week. In the past 6 to 8 weeks though, they've been selling 5000 to 6500 head per week. Early on, it was older cows and less desirable livestock, but as the drought wore on, ranchers have been selling the best of their cattle also. The heat has even caused some cattle deaths as livestock have been delayed for 3 or 4 hours in trailers in the sun, waiting to be unloaded at the sale barns.

Lifelong Oklahoma cattlemen like Glover worry that there won't be enough cattle later this year to meet demand. "This Fall, you might see only 500 head going through that sale barn per week instead of the 2000 you'd see normally. There will be a cattle shortage," Glover predicts. "You could see prices $25 to $30 more per 100 weight by next Spring because of the shortage. It'll take several years for this to get back to normal," he added.

That volatility may have a dramatic influence on consumer beef prices. And the drought's impact isn't over yet. "You can haul feed and hay, but not water," Glover said. "It'll take 8 to 10 inches of rain to have enough water to get the creeks and ponds going. We definitely need water in the next 60 to 90 days. Even if it just cools off, that'd be great. It was 109 degrees yesterday".

Other Oklahoma ranches like Ratcliff Ranch, Canadian Valley Ranch, White Cattle Company, Roos Ranch, Cole Brothers and Prater Land & Cattle, have had similar success fighting the drought by using the supplements. Glover, a SweetPro distributor, points out "Our cattle get by with less grass, less hay, and keep in better condition. People can't believe the cattle look as good as they do. The cows just look excellent".

Old style molasses blocks can melt in the kind of heat Oklahoma and Texas have had this year, and ranchers have seen cattle over-consume at up to 12 lbs per head per day on molasses. But SweetPro lick blocks are virtually weather-proof. They're made from distillers grains, not molasses, and are naturally high in protein, prebiotics, enzymes, fermentation feed ingredients and energy from complex carbohydrates, not simple sugars. They improve rumen fermentation, resulting in better overall digestion and increased feed efficiency of up to 25%. Vitamins and organically complexed trace minerals are added to help animal health, immune response and performance. All are important in helping a herd get through a severe drought like this one.