2030 Prediction: Half of the Adults in the U.S. Obese, TrekDesk Treadmill Desk Urges Movement Revolution

Half of U.S. adults will be obese by 2030 according to a new study. Dire prediction certainly but a 1% population wide decrease in BMI by walking with TrekDesk Treadmill Desks could offset the millions of new cases of diabetes, heart disease and stroke. 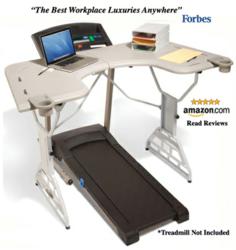 America leads the world in obesity and obesity related diseases. We wage wars on terror, crime, and drugs but the biggest threat to our nation’s security (health and financial) is obesity.

Forget 2012 apocalyptic fears, doomsday is in our midst and set to explode by year 2030 when the number of obese adults will balloon to 164 million, roughly half the adult population in the U.S according to a new study. TrekDesk Treadmill Desks urges a Movement Revolution to prevent the prediction from becoming reality.

“We already have an adult population that is 68% overweight with half of them obese but this new projection should wake America up to the dire consequences we face if we don’t mount an effort now to stop it and get people moving and eating sensibly,” stated Steve Bordley, CEO of TrekDesk Treadmill Desks.

Is there any hope? Yes. Losing small amounts of weight could decrease the projected increases in rates of disease. Losing just 1% of BMI (body-mass index) on a population wide basis (approximately 2 lbs. for a 200 lb. adult) would reduce the rates significantly: diabetes by 2 million, heart disease by 1.5 million, and cancer by 73,000 to 127,000 cases.

The average American walks less than 2.5 miles per day, nearly half of the amount of healthier European nations. This sedentary lifestyle is a leading contributor to our growing rates of obesity. Walking while working for 3-4 hours with a TrekDesk Treadmill Desk allows individuals to achieve the Surgeon General’s minimum recommendations for 10,000 steps per day and would also equate to a weight loss of 3-4 pounds per month for an average individual.

America leads the world in obesity and obesity related diseases. We wage wars on terror, crime, and drugs but the biggest threat to our nation’s security (health and financial) is obesity. America needs to recognize its biggest enemy and take the necessary steps to defeat it.

Designed to fit any existing treadmill, TrekDesk is an affordable, full sized workstation allowing individuals the opportunity to gain the necessary amount of exercise daily to maintain health, prevent disease, strengthen muscles, boost mood and productivity, without requiring additional time during the day or extra motivation.