The controversial website selling the e-book "When Women Cheat" is now searching for people who wants to promote the sexy art of cheating and taking advantage of the fastest growing fetish that is closely connected with modern, female infidelity! 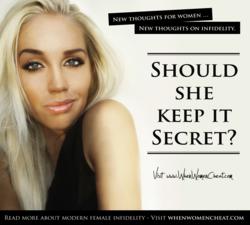 Why is cheating so popular? Why are websites promoting infidelity? Are men being conditioned through the media to become cuckolds?

Here is a simple way to take advantage of this fetish that is going straight to the mainstream segment anytime soon.

With search terms like female infidelity, cheating wives, cheaters these searchterms are getting hundreds of millions of hits each day- clarifying that this subject definitely sells.

The Website http://www.whenwomencheat.com offers the exciting bestselling e-book “When Women Cheat” for curious people, people who have been cheated on, people with secret sexual desires, problems in the bedroom, just being curious or wanting to learn more about their sexual nature and the modern nature of women in the western world.

The makers of the ebook and website has now launched an affiliate section for all who wish to earn commisions while promoting this spectacular ebook:

William Shakespeare once wrote, “a rose by any name would still smell as sweet” and a cheat by any other name would still be a cheat. Many people have found ways to allow their egos to redefine what they love to do by taking the sting away and calling it something else.

The more sophisticated adulterer calls it couple sharing. Some people like to think of it as spicing up their love life. They actually go out to find other couples to cheat with. They combat the notion of cheating by saying that their partner has their permission and many times they enjoy watching.

For many people, this behavior is quite the turn on. It becomes a large part of their sexual routine. In many instances, the only way for them to perform sexually with each other is to first watch their partner engaging in activities with someone else.

Now, the question is, is this a new phenomenon or an old dark secret finally being brought to light?

Surveys show that almost half of us want to cheat on our partner and it appears that women are increasingly surpassing men in regards to infidelity.

In the book, he claims that modern men are evolving into beta males, with lower testosterone levels and thereby being conditioned to accept female infidelity as normal, resulting in the biological rewiring of our ideals about monogamous love.

This is all part of what the author calls the: Female Agenda. In short, relationships and monogamy are changing and women are spearheading this change.

Depending on your point of view, this is either good, bad, or something in between. But either way, the book is intended as a wake up call from Longhi to provoke you into reflecting on the validity of your own point of view on relationships and the modern gender-roles.