Smoking Down Over Five-Year Period

Despite overall decline in smoking, light smokers are on the rise according to CDC’s Vital Signs Report. 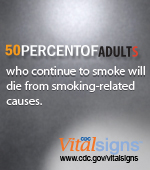 You don’t have to be a heavy smoker or a long-time smoker to get a smoking-related disease or have a heart attack or asthma attack.

The percentage of American adults who smoke decreased from 20.9% in 2005 to 19.3% in 2010, according to a new Vital Signs report from the Centers for Disease Control and Prevention. Of those adults who smoke, 78.2 percent (35.4 million) smoke every day.

Tobacco use remains the leading preventable cause of death and disease in the United States. Tobacco use and exposure to secondhand tobacco smoke kill an estimated 443,000 Americans each year. For every one smoking-related death, another 20 people live with a smoking-related disease.

“Any decline in the number of people who smoke and the number of cigarettes consumed is a step in the right direction. However, tobacco use remains a significant health burden for the people of United States,” said CDC Director Tom Frieden, M.D., M.P.H. “States with the strongest tobacco control programs have the greatest success at reducing smoking.”

“You don’t have to be a heavy smoker or a long-time smoker to get a smoking-related disease or have a heart attack or asthma attack,” said Dr. Frieden. “The sooner you quit smoking, the sooner your body can begin to heal.”

Although data from CDC’s National Health Interview Survey show fewer American adults are smoking, the rate of the decline between 2005 and 2010 is slower than in the previous five-year period.

“This slowing trend shows the need for intensified efforts to reduce cigarette smoking among adults,” said Tim McAfee, M.D., M.P.H., director of the CDC Office on Smoking and Health. “We know what works: higher tobacco prices, hard-hitting media campaigns, graphic health warnings on cigarette packs, and 100 percent smoke-free policies, with easily accessible help for those who want to quit. These approaches are proven to decrease smoking and reduce the health burden and economic impact of tobacco-related diseases in the United States.”

Parents and nonsmokers can

Vital Signs is a CDC report that appears on the first Tuesday of the month as part of the CDC journal Morbidity and Mortality Weekly Report, or MMWR. The report provides the latest data and information on key health indicators. These are cancer prevention, obesity, tobacco use, motor vehicle passenger safety, prescription drug overdose, HIV/AIDS, alcohol use, health care-associated infections, cardiovascular health, teen pregnancy, asthma, and food safety.

CDC works 24/7 saving lives, protecting people from health threats, and saving money to have a more secure nation. Whether these threats are chronic or acute, manmade or natural, human error or deliberate attack, global or domestic, CDC is the U.S. health protection agency.