Just 3 months from launch, English Attack! has attracted over 100,000 registered users to its innovative language-learning approach featuring movie clips, music and games within an international social network. Thanks to an innovative pedagogical approach combining elements of online entertainment, online social networks, and “gamification,” English Attack! (http://www.english-attack.com) is attracting an ever-increasing number of the “digital native” learners for which is was designed. 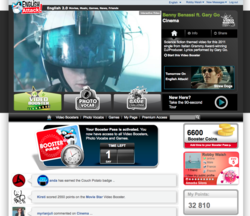 Launched at the end of June 2011, English Attack! has attracted its 100,000th registered user and has opened its 12th regional sales and marketing office.

Thanks to an innovative pedagogical approach combining elements of online entertainment, online social networks, and “gamification,” English Attack! is attracting an ever-increasing number of the “digital native” learners of English aged 13 to 35 for which is was designed.

“We are seeing excellent word-of-mouth among the target audience, which is contributing to our rapid user growth, both of registered users and of those hundreds of thousands of non-registered users who use the free version of the site,” said English Attack! co-founder Paul Maglione. “We expect to see this growth accelerate further in the back-to-school season these next few weeks across Europe and parts of Asia.”

English Attack! is a global site created to help learners around the world improve their English, and is already available with a user interface in 15 languages. It recently announced the opening of its 12th regional sales and marketing office, in Mexico City, Mexico.

The site attracts learners from all over the world, with users in France, Brasil, Taiwan, Spain, Italy and China taking the top six slots in the site’s user statistics. The site’s heterogeneous mix of user nationalities contributes to its appeal as a community of learners for whom the only common language is the one they are trying to improve, English.

English Attack! features a combination of video clips, thematic visual dictionaries, and games; a motivational reward-rich ecosystem; and social networking functionalities allowing learners to use what they learn from the site.

Photo Vocabs are visual dictionaries on a wide variety of subjects, with each lexical item featuring an illustration, a definition, use in a sample sentence, and an audio file.

Learners using English Attack! can periodically revisit the language elements absorbed in these learning units via a range of Practice Games, in which game design favoring repetition, replayability and challenge helps the shifting of the learned material into long-term memory.

The site’s system of scoring and badges, adapted from the most successful videogame environments, creates additional motivation for learners and replaces the conventional «evaluation » system of grades and pass/fail.

Finally, the site’s social functionalities (comments, making friends, messages) encourage the learner to actually use English in a friendly, learner-tolerant social context, putting site users in touch with other learners of English from around the world and thus creating a deeper personal involvement with the learning of the language.

Near-daily exposure to a language is by now recognized as a sine qua non factor in the effective learning of it. On English Attack!, the combination of fresh, current, real-world content with easy access short-session exercises creates the ideal conditions for frequent use of the site, and thus frequent exposure to (and use of) English.

Taking into consideration the media and website usage preferences of the 15-35 age group, English Attack! has adopted the “free-to-play” model which is currently proving highly popular with users of online social games.

Any user can enjoy free use of the site’s functionalities, as well as free access to a selection of content refreshed daily. Access to the entire catalog of pedagogical content is available via the site’s virtual currency (Booster Coins), with which a time-limited access pass (the Booster Pass) can be purchased. The user has a choice of accumulating Booster Coins via regular use of the site; via direct purchase; or through participation in special offers put forward by the site’s commercial partners.

English Attack! has been designed for use by individual learners as a complement to other forms of instruction; but can also be adopted as a language training resource by schools, universities, language institutes and companies. Its Schools and Teachers platform will be rolled out later this Autumn.

English Attack! was created in consultation with several teachers of English as a Foreign Language and is based on the latest findings of cognitive neuroscience. It is already being used both in the classroom and as a homework platform by many teachers in several different countries.

English Attack! has been recognized on the European high tech scene, with finalist status at the TechCrunch (Paris), The Next Web (Amsterdam), and Plugg (Brussels) competitions, and it was a winner of the SeedCamp Paris event.