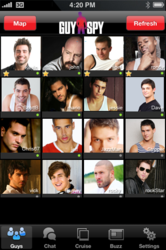 GuySpy is the best gay app to meet gay men, enjoy gay chat and meet guys you are really interested in - right now.

In addition to video, this latest release of GuySpy features Buzz, which integrates GuySpy’s popular gay blog. Another new feature, Cruise, takes users through the latest uploaded photos in GuySpy. But the key differentiator, according to Jeff Prete, General Manager of Stark Mobile Media, is video. “By adding video to our app, we believe that we now have the most robust, full-featured gay dating app on the market. In-chat video messaging is something that our customers have been asking for, and we are pleased to be able to deliver it,” said Prete.

Morris Chapdelaine, Executive Editor of GuySpy, adds, “GuySpy is gay mobile dating at its best! Compared to competitors like Manhunt and Grindr, GuySpy has way more features to help you find guys YOUR way. “ Pointing to features such as expanded photo albums, massive (200+) profile browsing, and the GuySpy blog reader, Chapdelaine asserts, “GuySpy is the best gay app to meet gay men, enjoy gay chat and meet guys you are really interested in - right now.”

GuySpy debuted its iPhone, iPad, and iPod Touch app in October of 2010. Since then, GuySpy for Android, GuySpy for Mobile Web, and GuySpy for Web have been added to the product line. To date, over 110,000 guys have downloaded the app across 18 countries.

GuySpy uses location-based services, such as GPS, to connect gay, bi and curious users for free live gay chat.  Users can find gay men by location, view profiles and photos, upload and listen to voice greetings, send and receive video and image files, and text chat.  To make it even easier to chat with gay guys in their area, users have the option of viewing the entire community or using search filters to find only the guys that meet their criteria.   For more information, visit http://www.guyspy.com . Press kit available at http://guyspy.com/sites/default/files/GS-presskit.zip .

About Stark Mobile Media Stark Mobile Media develops and distributes web, mobile web, and mobile applications to North American markets. Its flagship product, GuySpy, is a location-based mobile dating product that combines the intimacy of voice and photos with the immediacy of location. GuySpy is available for iPhone/iPad/iPod, Android, web, and mobile web. For more information, visit http://www.guyspy.com.