History of Yachting and the America’s Cup Auction 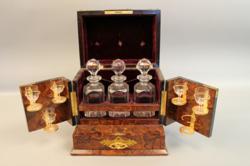 On October 16, 2011 Boston Harbor Auctions is hosting an auction of incredibly important historical artifacts of significance to the America’s Cup legacy and the sport of yachting itself.
Highlights of the sale include a silver-plated replica of the America’s Cup that was given to Chandler Hovey, an America’s Cup champion and participator of several Cup races that span 34 years. Since the America’s Cup trophy, the “Auld Mug”, is a one of a kind piece that is awarded to the winner of the final race in the series and then relinquished to the next winner, if we consider the prestige of the America’s Cup races, and the presentation of the highest award being the Cup, the idea that a person subsequently commissioned a replica to bestow on the icon of yachting that Hovey was, puts the exclusivity of the piece in perspective.

There will be a large assortment of original press photographs from the America’s Cup races over the years, dating back to the 1930’s.

Coming off the success of our last auction that chronicled the yachting life of J. Pierpont Morgan, we have the opportunity to bring more rare items that further signify his importance to yachting and the America’s Cup as well.
Two of the items being trophies presented by the Newport Yacht Racing Association in which Columbia beat Independence in what is considered a “playoff” series for the Cup in 1901. After knocking out the Herreshoff built Constitution in the trials a year earlier, the Columbia went on to defend the Cup against Shamrock and was successful. She then competed in trials in 1901 proving that she was the far superior vessel. The first of the two trophies was presented after an August 1st race and the second presented for another successful win two days later. The dominant Columbia knocked the Lawson owned, Lawley built yacht Independence out of the running to compete for the 1901 Cup. Lawson had Independence completely dismantled following her devastating performance. Commissioned by J. Pierpont Morgan, the Herreshoff built Columbia went on to win the America’s Cup, captained by the famous Charlie Barr against Shamrock II exactly two months following the presentation of these trophies.

There will also be an incredible pair of silver goblets by Howard & Co. of New York that were presented to J.P. Morgan and passed down within his family. The manufacturer stamp with date and “sterling” are on the bottoms of each cup along with the script engraving: “From J.C.R. & F.P.”. The front of each cup reads “Corsair 1898” in script and were presented to Morgan to commemorate his yacht “Corsair” the year she was flagship of the New York Yacht Club.

The goblets were presented to J.P Morgan by Col J.C.R. Peabody and his wife Florence (Wheatland) Peabody of Massachusetts the same year that the Corsair became the naval battleship “USS Gloucester”. A close friend of J.P. Morgan, Jr., there is mention of JCR Peabody listed as “Powers of Attorney” in the Morgan papers contained in the Morgan Library and whose son is the godchild of J.P. Morgan, Jr.. He is a descendent of the Peabody, Endicott and Putnam families of Massachusetts where John Adams, Isabella Stewart Gardner, Rev. Endicott Peabody, founder of the Groton School and George Peabody the first business partner of Junius Spencer Morgan as well as benefactor of the Peabody Institute, can be linked.

There will be various American yacht club representation including some Mintons china from J.P. Morgan’s yacht Corsair, Flagship of the New York Yacht Club noted above. A stunner in the auction will be an incredibly exotic burlwood decanter set / humidor by Tiffany & Co., New York from 1873 that was a gift from the Seawanhaka Yacht Club to the Atlantic Yacht Club commemorating a race in which the sloop “Vixen” won. The decanter set was then used as a trophy to commemorate the subsequent races in the following years through the 1880s as noted on an engraved gilt bronze plaque contained in the velvet liner of the decanter set.

Several museum quality model boats of the America’s Cup will be auctioned including Rainbow and Endeavour of 1934, America of 1851, Columbia of 1901, Enterprise and Shamrock V of 1930 and others. There will also be a great model representation of the steam yacht era including the Presidential steam yacht Mayflower of 1897, that was used to entertain and transport diplomats to Portsmouth, NH for the termination of the Russo-Japanese War resulting in the Treaty of Portsmouth and the subsequent Nobel Prize for Roosevelt. Other steam yachts included will be the Niagara, the Corsair, and George Baker’s Harvard.

Other interesting pieces in the auction will include marine paintings by noted artists such as Edouard Adam (1847-1929), Burnell Poole (1844 - 1933), and Randy Burke. Included will be several lots of furniture and gentleman’s antiques such as globes, binoculars and compasses and a special lot of original photographs of JFK sailing with friends that include a younger John Kerry.