Richard Byerley of Walla Walla, Wash. is attempting to break the Guinness World Records™ as the oldest person to summit Mt. Kilimanjaro in October 2011 with Adventures Within Reach. 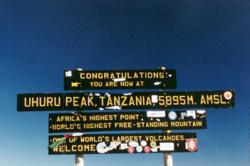 "Richard Byerlery is an inspiration to all of us. We are never too old to realize our dreams like climbing Kilimanjaro," Robin Paschall of Adventures Within Reach.

Richard Byerley wants to go where no one else his age has gone before: climb to the top of Mount Kilimanjaro.

The 84-year-old is seeking to earn a spot in Guinness World Records™ as the oldest person to summit Africa’s highest peak on foot trekking with Adventures Within Reach. Kilimanjaro stands at 19,340 feet in northeastern Tanzania near Kenya.

Byerley and his two grandchildren, Annie, 29, and Bren, 24, will begin their six-day trek on the Machame Route in October 2011. They will cap their African climbing adventure with a two-day safari to Tanzania’s Ngorongoro Crater, a UNESCO Natural World Heritage Site.

The active octogenarian, who divides his time between Sun Valley, Id., and Walla Walla, Wash., where he owns an alfalfa farm, is training for the climb by hiking mountains in both Washington and Idaho, bicycling, running and occasionally moving 40-pound pipes in the fields on his farm. He has already bagged Mount Whitney in California (the tallest mountain in the lower 48 states, at 14, 495 feet) and Mount Rainier in Washington (the most heavily glaciated peak in the lower 48 states, at 13, 211 feet) and has skied for 44 years, a pastime he took up at the tender age of 40. But his physical pursuits are not limited to land. He and his wife Beth are both avid sailors; their voyages have included a trip from Seattle to Tahiti on their 50-foot boat.

His attempt to complete this feat may have gone unrecognized, if not for the trained eye of Robin Paschall, founder of Adventures Within Reach, a tour operator based in Boulder, Colo., specializing in customized, affordable adventures.

Byerley won the Adventures Within Reach trip at a charity auction for the Galena Lodge, located near Sun Valley, Id.

Conditions for their journey look good. “The weather is typically great at that time of year, and the Machame Route is our most popular because of the high success rate,” Paschall says. “The route offers a continuous scenic show, but to top it off, Richard and his grandkids will be summiting right before a full moon, which will reveal a brilliant night sky.”

About Adventures Within Reach

The current oldest Guinness World Records™ holder to summit Kilimanjaro on foot is British retired professor George Solt, who earned the title in 2010 at age 82.

It is purported that 87-year-old Frenchman Valtee Daniel reached Kilimanjaro’s apex, but his ascent was not documented.

Photos of Richard Byerley and Mount Kilimanjaro are available upon request.