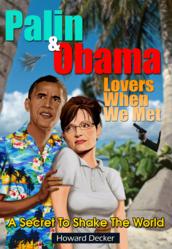 Palin and Obama -- Lovers When We Met

This ebook “what if…” novel is a unique love story set against romantic Hawaiian summer nights and young lovers cavorting on bindingly white sand beaches.

Were Sarah Palin and Barack Obama lovers when they both lived in Honolulu in the early 1980s?

That is the explosive question posed by Howard Decker in his new ebook novel, “Palin and Obama – Lovers When We Met.”

“It is a historical fact,” Investigative Reporter and author Decker says, “that Sarah (Heath) Palin and Barack (Barry) Obama were in Honolulu, Hawaii at the exact same time, when Sarah was a young woman beginning her college career and Barack was a young college student.”

“Sarah went to college very near the neighborhood Barry lived in with his grandparents,” he said.

“There is no historical record that shows the two actually met at that time,” he said.

What if… the two attractive, basketball-crazy young adults had met and fell for each other?

What if…one of them had a dark secret that could tear the country apart?”

This ebook “what if…” novel is a unique love story set against romantic Hawaiian summer nights and young lovers cavorting on bindingly white sand beaches.

Much of the action later in the ebook takes place in the pitiless heat of the California desert.

The novel is also a political thriller with Russian spy ships, sleeper foreign agents, a runaway unpiloted drone aircraft with an atomic bomb in its belly, a Hawaiian wild boar hunt with knives, exotic poisons, and the biggest secret any man or woman must keep.

“Palin and Obama – Lovers When We Met” is published by Publish Green, 213 Third Avenue #290, Minneapolis, MN 55401. It is available now for sale as an ebook at Amazon.com, Barnes & Noble, and iBookstore.

It will be available for sale at a later date at other ebook outlets.