MusikRoom™ is a new and free mobile application that lets people better create, share and experience music together. Be the first to get access to the application for free, apply @ http://www.tinyurl.com/musikroom 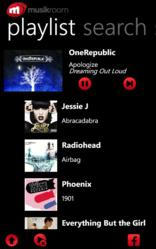 It’s like a live jukebox, except this one is free and it can happen anywhere”.

Angel, a 15-year-old hip-hop hipster from Sunnyvale, CA had been rocking the party for hours; his friends dancing to the tunes of Jason Derulo, Lady Gaga and Pitbull. But now they’re looking for diversity. So they grab their phones and suggest something more “edgy.”

Without even walking up to Angel, his friends were able to send requests and re-order songs to match the crowd’s need and votes.

Is Angel a professional DJ? What magical software does he use? Serato® or Tracktor®?

No. Angel is a teenager whose DJ equipment consists of a simple speaker and a phone. He has over 1,000 songs on his iPhone® and listens to them constantly; at home, at the gym, in the car, or on his way to school.

The application he uses to run music on his phone is MusikRoom™. Angel loves this new app because it allows him to create and re-organize playlists fast and easily, then brag on Facebook about what he is “jamming to” while “studying.”

What’s more, MusikRoom™ lets Angel better share his passion for music with his friends. Every other day, he gets together with his pals to “compare tracks.” He pulls up his Bluetooth® Jawbone® JAMBOX speaker, puts down his phone on the table and presses play.

Then, the Magic starts. His friends start up the app on their phones and join the MusikRoom™ to see the tracks Angel is going to play, and start voting on the tracks in the playlist.

“It’s like a game,” says Angel. “Everyone tries to impress the other with the new songs they just discovered. People earn points for suggesting new songs. Others use points to veto tracks they can’t stand. It’s like a live jukebox, except it’s free and it can happen anywhere.”

What about Angel? What does he get out of this? “Well, obviously I’m not a professional DJ, but I want to put on a good show for my friends. MusikRoom™ is the only app that lets me do that live, from my phone and wherever I’m at,” he says. “Plus, whenever a new person joins my room, they automatically become my fan on Facebook, so I’m building a pretty cool community!”

Finally, when asked why he wouldn’t simply play music by using services such as Spotify or TurnTable.fm, Angel replied: “First of all, cell coverage where we live is spotty at best so I can’t rely on that to stream music over the air with those services. Second, all the music I need is ripped on my phone so why would I pay for another service? Plus, my parents only let me use my PC for an hour a day, so that doesn’t work. My phone is what I use for music, it’s always with me and it’s super easy to use. Web or PC music apps are really for older people.”

MusikRoom™ is a new and free mobile application that lets people better create, share and experience music together. Be the first to get access to the application for free, apply @ http://www.tinyurl.com/musikroom.