A unique gold coin of the enigmatic Greco-Baktrian ruler Sophytes, which may very well be the first ever Hellenistic gold issue, is to be auctioned in London on October 2nd and is expected to fetch £200,000. Source: Roma Numismatics Limited. 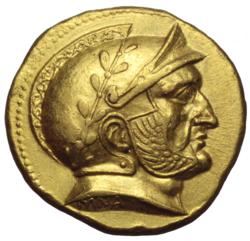 Roma Numismatics’ second public auction of Ancient Coins on 2 October will feature a unique gold coin of the enigmatic Greco-Baktrian ruler Sophytes, issued in the wake of the collapse of Alexander The Great’s empire, which may represent the very first gold issue of the Hellenistic period. Having been published several times and publicly exhibited at the Henri-Prades (Lattes) Museum in France, it will now be offered for sale for the first time. It will be on display at Roma Numismatics’ offices on Hanover Square until 01 October before going under the hammer at the Cavendish Hotel London where it is estimated to realise £200,000.

Richard Beale, Director of Roma Numismatics: “This coin is extremely important for the advancement of our knowledge of ancient Baktria, and represents a very exciting issue in the context of Greek coinage as a whole. We expect it to generate significant interest both at the pre-auction viewing and on the day itself, especially given the buoyant nature of the market for ancient coins at present. This is in part due to the increased awareness of the availability of this ancient art form, and because they are seen as a hedge against turbulence in other markets and are an attractive investment to many that can frequently bring high returns.”

The identity and origin of Sophytes has been the subject of much debate since the discovery of the first coin bearing his name in 1866. While it has been suggested that he was a Greek mercenary captain, it is more likely that he was a Greco-Indian king, as was reported in the Bibliotheca of Diodorus Siculus, with a capital at Baktra, in modern-day Afghanistan. Osmund Bopearachchi, a director of research at the French National Centre for Scientific Research, argues in ‘Le Portrait d’Alexandre le Grand’ that Sophytes’ gold coinage must have been struck before the Greek Seleukid campaign against the Indian king Chandragupta, and that they are the coins of a powerful and independent ruler in this most eastern part of the Greek world.

The circumstances of this issue may lie hidden in the turmoil of the years following Alexander’s death and the fracture of his empire. A man such as Sophytes would have stood to gain much in this time of conflict and opportunity, and throughout the period of 316-305 BC there are no surviving records regarding the satrapy of Baktria. It has therefore been suggested that it was in this time when Seleukos, one of Alexander’s generals and successors, was campaigning to regain the lost eastern provinces, that Sophytes seized power and struck his series of gold and silver coinage, and that furthermore it is also possible that Seleukos’ campaign also had as one of its many goals, the removal of this rebel upstart.

While the facts of Sophytes life and identity may forever remain unknown to us, this coin is nevertheless of great historical and numismatic interest. The fact that this coin represents certainly one of the earliest, or indeed very possibly the first ever issue of a gold Hellenistic coin, is sure to draw the interest of collectors around the world.