Gruskin Group™, one of the nation’s leading design firms, has been awarded the project to design a new, mixed-use building for Kean University in Union, NJ. The proposed 102,275-square-foot building will serve as a gateway marking the main entrance to Kean’s campus located at the intersection of Morris Avenue and Green Lane. 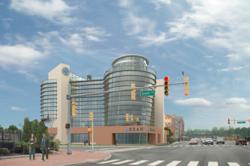 Gruskin Group™, one of the nation’s leading design firms, has been awarded the project to design a new, mixed-use building for Kean University in Union, NJ. The proposed 102,275-square-foot building will serve as a gateway marking the main entrance to Kean’s campus located at the intersection of Morris Avenue and Green Lane.

The six-story building, which is intended to provide both a stimulating and metaphorical environment for learning, includes a café and retail space on the first floor, classroom and administration space on floors two through five, and a conference center and rooftop terrace on the sixth floor. The building will serve as the home for Kean’s new Robert Busch School of Design, as well as the University’s expanding business programs.

“Our objective for this new building is to make a bold architectural statement and announce to visitors and the general public that they are about to experience something unique upon entering the campus. At the same time, the building design must establish the tone and quality of what can be expected beyond its demarcation as the University’s primary entry portal,” explained Kenneth A. Gruskin, principal and founder of Gruskin Group.

Among the building’s most distinctive and modern design elements is its undulating glass building façade which stands in contrast to three opaque towers that not only serve a practical function, but also align with the three local geometries that define Kean’s campus. For example, Gruskin Group designed the towers to house elevators, fire stairs, and bathrooms. In addition, the tower along Morris Avenue aligns with the grid that defines the primary road systems and the original Kean structures. The second tower defines the academic building’s main entrance and follows the geometry of the main Kean University campus. The third tower’s vertical plane faces the University’s athletic fields and facilities.

“By responding to the local framework of the campus and city, the building is able to serve not only as a gateway building, but also as a critical part of the larger whole,” noted Gruskin.

Among Gruskin Group’s other planned features for the building are:

Kean University President Dawood Y. Farahi said: “Kean University is dedicated to the intellectual, cultural and personal growth of its students, faculty and professional staff alike. In particular, we are committed to preparing our students to think critically, creatively and globally. Gruskin Group’s vision for the building’s design is a compelling one that reflects these values.”

About Gruskin Group™
Gruskin Group™ is an integrated design firm that builds unified brand experiences through architecture, brand development, visual communications, web/interactive, industrial design, interior design, strategic consulting, and sustainable design.
Named among the nation’s top 250 architecture firms by Architectural Record in 2011, Gruskin Group has also been ranked by DDi magazine as one of the top 20 retail design firms in the U.S. for the past three years, and included in Commercial Construction Magazine’s 2010 and 2011 lists of Top Commercial Architects. In addition, Gruskin Group was named to the Inc. 5000 in 2009 and 2010. The firm’s and its professionals’ award-winning work has been recognized by AIA, the Retail Design Institute, New York Ad Club, New Jersey Ad Club, ASID, Graphis, and the Association of Graphic Communications. For additional information, visit http://www.gruskingroup.com.
###