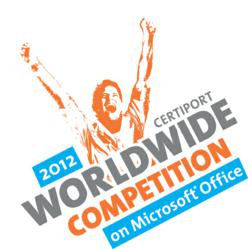 The popularity of the competition is a reflection of the global footprint Office has–more than 750 million users worldwide. Students who have put in the extra effort to master it will be increasingly productive in their schoolwork and in the workplace.

Students will compete on Microsoft Word, Excel and PowerPoint tracks for the Office 2007 and 2010 system. The 2012 contest also marks the introduction of the 2010 Microsoft Office Specialist (MOS) PowerPoint exam for the first time in the history of the competition. With a 49 percent increase in the number of students who participated in 2011, Certiport expects more than 300,000 students from over 50 countries to compete for the title of “World Champion.”

Details about the Certiport Worldwide Competition on Microsoft Office:
http://www.officecompetition.com

Entering its eleventh year, countries from around the world will host local competitions to determine country and regional representatives based on exam scores and completion times. The deadline for all qualifying exams will be June 15, 2012. Selected finalists will then compete in the 2012 World Championships which will be held in Las Vegas, Nevada on July 29–31, 2012. The top three winners in each category will receive scholarship prizes for $5,000, $2,500 and $1,000 respectively.

"This event is becoming very popular among students worldwide, and I enjoy watching these kids really master Office and have fun competing,” said Takeshi Numoto, Corporate Vice President, Microsoft Office Division, Microsoft Corp. “The popularity of the competition is a reflection of the global footprint Office has – there are more than 750 million Office users worldwide. Office is a powerful product, and these students who have put in the extra effort to master it will be increasingly productive in their schoolwork and ultimately in the workplace.”

The Microsoft Office Specialist (MOS) certification was created to meet the growing demand for individuals to leverage the full features and functionality of Microsoft Office Systems. Students who earn a MOS certification demonstrate proficiency using the newest versions of the world's foremost desktop computing applications including Microsoft Word, Excel and PowerPoint.

"The Worldwide Competition on Microsoft Office has been gaining incredible momentum over the years, and the student competitors are incredibly passionate about preparing for the exams and representing their countries,” said Ray Kelly, Chief Executive Officer, Certiport. “The competition has become a technology olympics as students demonstrate their tremendous skills and compete against the best of the best. Certification is a valuable tool for students – it helps them to be college and career ready. It also proves that they have desirable skills and gives them confidence in using these applications more fully than most other users in the world.”

Participants who outperform their peers to make the final round of the competition generally have perfect or near-perfect exam scores and completion times well below the allotted examination time. Certiport recently added a new practical component to the Worldwide Competition on Microsoft Office, requiring contestants in every category to take the standard MOS exam, and also recreate an existing Word, Excel or PowerPoint document from a provided, printed example.

“The Worldwide Competition on Microsoft Office allows students to connect with peers from around the world and compare their impressive level of know-how with others, while having fun at the same time,” said Lutz Ziob, General Manager, Microsoft Learning. “We are thrilled to see the tremendous dedication and support from teachers who encourage, train and support the participating students. Without their ongoing involvement, this competition would not have the same level of performance and success.”

Current students who pass a qualifying exam and are enrolled in an approved, accredited learning institution are eligible to compete. The student must be between the ages of 13 – 22 on June 15, 2012.