A popular Internet dating site known for its attractive women and affluent men has revealed the results of a survey that shows a direct correlation between the value of the car a man drives and the length of a date, including the probability of a second date. 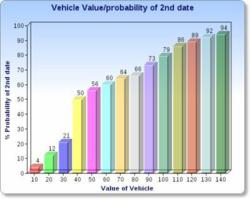 Correlation between vehicle value and probability of 2nd date

Women want to know that the person they are potentially going to be with can provide for them, today, tomorrow and for the foreseeable future.

Sugardaddie.com long known for its commitment to helping women obtain and maintain a more affluent and lavish lifestyle has recently revealed the results of a survey that targeted the dating habits and expectations of women who have met and gone out with gentleman from this popular upscale dating site. The first part of the survey targeted women’s attitudes towards a man based on the type of car he drives as it relates to the length of the date, while the second part of the survey concentrates on how the type of vehicle the gentleman drives affects the probability of a second date.

A survey of 4,638 young women between the ages of 21 and 40 were asked how long a typical date lasted, and what day of the week the date took place, in order to see if there were any outliers due to weekend dates or holidays. It was decided that there was no significant differences attributed to the day of the week, and that dates which required significant travel or an overnight stay would be counted as 7 hours or more.

The number of respondents actually having dates with vehicle values above $100,000 dollars was only 2 % of those surveyed, with the majority of survey responses falling in the $25,000 to $80,000 range. The research staff used Kelley Blue Book values to obtain this information.

A significant increase in the length of a date was noticed at the $45,000 value, with another considerable spike above $110,000.

Values that were above the $45,000 threshold were designated as type “A” vehicles while those below this amount were designated as type “B” vehicles. Those men who drove vehicles with an “A” designation typically had dates that lasted 2.5 or hours or longer, while those who received a “B” designation based on vehicle value had dates that averaged under 2 hours, with the majority of type B dates lasting 2 hours or less.

Steven Pasternack the President of Sugardaddie.com was not surprised by the results of the survey, he stated “ With grim economic conditions faced by many in the country today, someone driving a luxury vehicle displays the probability of more stability than someone driving the old inherited family car. Women want to know that the person they are potentially going to be with can provide for them, today, tomorrow and for the foreseeable future.” Mr. Pasternack also acknowledged that those women polled are members of Sugardaddie.com, and are looking for men who can provide a more upscale and comfortable lifestyle.

The women surveyed were then asked about the probability of going out on a second date based solely on the vehicle value of the gentleman. They were asked to place a percentage to the likelihood of a second date. The women were told to base their answers only on Vehicle value and not on anything to do with the gentleman, restaurant or quality of the date. The study showed a definite increase in the woman’s consideration of another date once the vehicle value passed the $40,000 vehicle value mark, which is very close to where the part of the study dealing with length of date took a significant upturn.

Although this is not a scientific study, it is interesting to show that a relationship exists between the value of the car a man drives and the time a woman will invest in dating him. A curious trend was noticed that if the value of the vehicle was significantly more than the vehicle “A” threshold, the probability of the date turning into an “overnight” encounter increased 48%, possibly due to travel time to more remote destination. This may suggest that a significant portion of the studied demographic is willing to speed up the dating and relationship process for the hope of stability and affluence.

The President of Sugardaddie.com was quick to point out that the link of dating to vehicle value does not take into consideration that two people who have met online may see their relationship quite differently once they meet in real life, and might consider pulling a fire alarm at the restaurant to end the date quickly, but it’s a fun survey topic for consideration.

About Sugardaddie.com
Sugardaddie.com is an internet dating site that was founded in 2002. Since its inception they have appeared in the media numerous times in print, radio and TV etc, in both the United States and abroad. Sugardaddie.com offers a unique dating experience to meet the demand of its members who desire to meet others considered to be attractive and affluent.