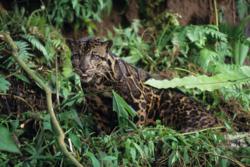 The deal will create models for forest conservation and sustainable economic development in Borneo, the third-largest island in the world, home to unique species such as orangutans, gibbons, clouded leopards, “pygmy” elephants, hornbills, and up to 15,000 flowering plants.

“This is an important step forward in efforts to save one of the world’s richest forest ecosystems and provide economic security for the millions who depend on those forests,” said Tom Dillon, Senior VP for Field Programs at WWF in the United States. “Any way you look at it, this is a winning situation for Indonesia – enabling it to use these funds to protect globally spectacular biodiversity in the Heart of Borneo and fight climate change.”

Greg Fishbein, Managing Director for Forest Carbon at the Conservancy, added, “This deal will demonstrate how Indonesia can grow and create jobs in a smarter way that minimizes impact on the forest, improves the livelihoods of local communities, and ultimately allows the Government to achieve its twin goals of 7 percent economic growth and up to a 41 percent reduction in carbon emissions by 2020.”

Borneo – its territory shared by Indonesia, Malaysia and Brunei – was once almost entirely forested, but between 1985 and 2005, the island lost an average of 2.1 million acres of forest every year. Only half of Kalimantan’s forest cover remains.

This forest destruction has impacted local communities – about eight million people live in West and East Kalimantan – who have lost a portion of their food, water, medicine, and building resources. Forest loss has also impacted the island’s thousands of plant and animal species, some found nowhere else on Earth.

The forests also contain vast amounts of carbon, which makes them a crucial part of President Yudhoyono’s pledge to fight climate change by reducing Indonesia’s carbon dioxide emissions by up to 41 percent by 2020. Forest loss, conversion of forests, and land use change in Indonesia are the largest sources of carbon pollution, accounting for over 60 percent of Indonesia’s total annual emissions.

Major threats to the forests and biodiversity of Borneo include expansion of oil palm plantations, illegal and unsustainable logging practices, and mining.

The debt swap will address these threats by investing in improved land-use planning to direct development to already degraded lands, improved management of protected areas, and other critical measures to reduce forest destruction, while supporting economic growth and local communities.

The swap will focus investment in three critical Districts. District Governments have tremendous influence on land-use decisions in Indonesia, and are of manageable scale to achieve near term results. Developing model programs across entire District boundaries, as partnerships of District, National and Provincial Governments, can help move Indonesia down a pathway towards national success.

The agreement is authorized under the US Tropical Forest Conservation Act (TFCA), which allows countries such as Indonesia to re-direct debt to the U.S. to forest conservation purposes. WWF and the Conservancy each contributed US $2 million to the deal.

ABOUT WWF
WWF is the world’s leading conservation organization, working in 100 countries for nearly half a century. With the support of almost 5 million members worldwide, WWF is dedicated to delivering science-based solutions to preserve the diversity and abundance of life on Earth, halt the degradation of the environment and combat climate change. Visit http://www.worldwildlife.org to learn more.