Kindle Fire Sales Reach an Estimated 95,000 Units During First Day of Sales According to Estimates Provided by eDataSource

eDataSource estimates that sales of the new Kindle Fire from Amazon reached 95,000 units during the first day of sales. 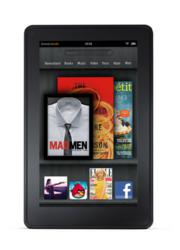 eDataSource, a leading provider of online competitive intelligence, estimates that sales of Amazon's new Kindle Fire reached 95,000 units during the first day that the device was made available through Amazon's website.

"eDataSource's panel of 800,000 inboxes allows us to gain insight into eCommerce sales" said Carter Nicholas, CEO of eDataSource. "Within hours we can get a read on hot product launches based on sales from leading eCommerce websites."

By analyzing purchase receipts received by email, eDataSource is able to estimate the daily orders places at major ecommerce sites as well as what products are being purchased. eDataSource can then report on eCommerce trends at large or specific product sales.

Lastly, recognizing that the folks who provide accessories often rake in the profits when fancy new devices are sold, eDataSource notes that 27% of Kindles were sold with some kind of accessory, and Marware protective covers were by far the most popular accessory for the Kindle Fire.

In April 2010, eDataSource estimated the number of iPad purchases to be 350,000 on the first day that product came to market. This compared to the 300,000 Apple subsequently reported for first day sales.