In order to make building IVRs and creating phone menus as easy as possible for its customers, CallFire created a new feature that simply asks for a description of the intended design, and assigns a CallFire IVR expert to create everything for the customer. The feature is even free-of-charge for the first month of its release. 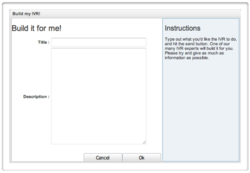 Now, through the click of a button, customers have instant access to CallFire's array of IVR experts, whose in-depth knowledge of the IVR space can help customers design a dynamic, personalized phone experience without any IVR knowledge of their own.

CallFire-- a leader in the voice and SMS communications space -- always makes an effort to be listening and responding to its customers' comments and suggestions. That is why they have added a new “Build My IVR” feature to their Hosted IVR service, taking all the difficulty out of the IVR creation process.

What is an IVR? CallFire explains it on their IVR Designer page: IVR stands for "Interactive Voice Response." It allows the system to read custom information using text-to-speech and to detect keypad inputs. IVR can be used to build systems such as virtual receptionists, custom appointment reminders, and advanced telephone surveys.

Building an IVR from scratch can be confusing, especially when it comes to the more advanced capabilities like creating and stashing variables, or integrating with Google Analytics. So for everyone who wants to build an advanced IVR that conducts surveys, routes calls, reminds customers of appointments, or any of a thousand other options — there is no longer that deterrent of it just being too difficult. Now, all CallFire customers have to do is fill out a small text box describing what they are trying to design, and one of CallFire's IVR specialists will be in touch shortly to help create it. For the next month, they’ll even do it for free.*

The COO of CallFire, TJ Thinakaran, is sure the feature will be revolutionary in the IVR space, saying, "Now, through the click of a button, customers have instant access to CallFire's array of IVR experts, whose in-depth knowledge of the IVR space can help customers design a dynamic, personalized phone experience without any IVR knowledge of their own."

To get access to the feature, all individuals need to do is log into their CallFire account (or create one now without any signup fees or contracts), go to create a Hosted IVR capaign, click the “Build it for me” button, and then just describe their design in plain English. CallFire's team of IVR specialists will take it from there!

*Signed service agreement may be required. CallFire Terms of Service of Agreement applies. Restrictions may apply, or charges may be subject to change. Available for a limited time and may end without notice.