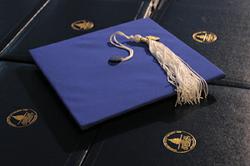 Four dedicated public servants—Gene Sperling, Richard Lugar, Aaron Williams and Stephen Zack—journalist Bob Schieffer; and astronomer Vera Rubin, will address American University’s graduates at the 125th commencement ceremonies on May 7 and 8, followed by the law school ceremony on May 22.

The U.S. Senate's most senior Republican, Richard G. Lugar, will address graduates of the School of Public Affairs at 9 a.m. May 7. The two committees he serves on—Foreign Relations and the Agriculture, Nutrition and Forestry—are much like AU’s future public service graduates who are globally involved, nationally focused and locally engaged. Lugar will receive an honorary doctorate of public service.

Veteran journalist Bob Schieffer, moderator of CBS Face the Nation, will speak to the graduates of the School of Communication at 1 p.m. May 7. One of the few broadcast or print journalists to have covered all four major beats in the nation's capital—the White House, the Pentagon, the State Department and Capitol Hill—Schieffer will share his knowledge and know-how with students who are redefining communication in this digital age. Schieffer will receive an honorary doctorate of humane letters.

National Medal of Science recipient Vera C. Rubin, an American astronomer who established the presence of dark matter in galaxies, will speak to students graduating from the College of Arts and Sciences at 4:30 p.m. May 7. A fascination for the stars as a youth motivated this science wonk to pursue answers to questions that most scientists believed were obvious and her research has disproved previously accepted theories on the universe. Rubin will receive an honorary doctor of science.

Gene Sperling, director of the National Economic Council and assistant to the president for economic policy, will speak at the Kogod School of Business ceremony at 9 a.m. May 8. He recently served as counselor to Treasury Secretary Tim Geithner—as a key advisor on fiscal, budget, tax, job creation and small business issues—and previously served as director of the National Economic Council under President Clinton. In addition to his economic work, Sperling has specialized on education in poor and conflict-affected nations. Sperling will provide insight about today’s rapidly changing global business economic environment and will receive an honorary doctor of laws.

Celebrating its 50th anniversary, Peace Corps Director Aaron S. Williams will address graduates of the School of International Service at 1 p.m. May 8. A former Peace Corps volunteer himself, Williams’ own career path in the development and implementation of worldwide assistance programs will inspire many graduating students who also have the same desire to create meaningful change. AU is fourth among medium-sized colleges with the most (55) alumni volunteers currently serving in the Peace Corps. Williams will receive an honorary doctor of international affairs.

Stephen N. Zack, the first Hispanic and Cuban-American president of the American Bar Association, will speak at the Washington College of Law ceremony on May 22. Zack’s ABA initiatives to focus on Hispanic legal rights and responsibilities, as well as the need for increased civic education in schools will resonate with the graduates at one of the top-ten most diverse schools of law in the nation. Zack will receive an honorary doctor of laws degree.

In addition to conferring honorary degrees, American University President Neil Kerwin will bestow the President’s Award, the highest award for undergraduate students, to a graduating senior who has displayed a longstanding commitment to building community and promoting AU’s ideals of academic achievement, integrity, selflessness, leadership, and service. At the May 7 School of Public Affairs ceremony, the university will recognize Robert Durant, professor of public administration, as the Scholar-Teacher of the Year.

Families and friends who cannot make the ceremonies will be able to watch a live stream of each ceremony on the American University Website. Students, alumni, friends and family are also encouraged to follow AU’s Commencement on the Facebook group, and tweet during commencement using the hashtag—#2011AUGrad.

Located in Washington D.C., American University is a leader in global education, enrolling a diverse student body from throughout the United States and more than 140 countries and providing opportunities for academic excellence, public service, and internships in the nation’s capital and around the world.

Media RSVP:
On-site registration and check-in will be at the Bender Arena loading dock. All media must be checked in 15 minutes prior to the start of each ceremony. Parking is available at the Asbury parking lot next to the arena. Downloadable map is available at: http://video.realviewtv.com/education/au/map/