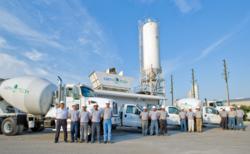 Earth Tech owns its own batch plant where grout used in sinkhole repair is manufactured; this assures timely repair for homeowners.

For the first time, homeowners can be certain they're getting their sinkhole problem solved.

"Homeowners facing sinkhole damage—and their insurers—should be certain that the company hired is accountable for correcting identified sinkhole damage. Our warranty will be in effect for a full five years after the stabilization work is complete," said Ron Broadrick, President of Earth Tech, a business he started with his father Lewis in Land O’ Lakes, Florida. "Homeowners can be completely assured of the quality of our work well into the future, and this assurance comes at no additional cost."

"No other soil stabilization company has ever offered such a warranty or had the backing of such a dependable third party. We were able to obtain this unique backing because of our longstanding track record of quality home stabilizations. Florida sinkholes are a continuing problem. We’ve stabilized more homes in Florida than anyone else over the past twenty years," said Broadrick. "For the first time, homeowners can be certain they're getting their sinkhole problem solved."

"Other stabilization companies may offer a warranty, but they might not be in business down the road to stand behind the work. Earth Tech’s warranty is independently guaranteed, joining the resources of a stabilization industry leader with a giant in the insurance business," said Broadrick.

The World's First Sinkhole Stabilization Warranty Guaranteed by a Third PartyBacked by the largest specialty insurance company in the world.

The Road to a Remarkable Sinkhole RepairThis brochure describes the process of repairing a homeowner's sinkhole damage from start to finish.