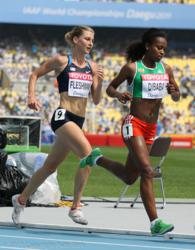 I’m able to keep my fitness level on par with my competitors while putting in fewer miles, which greatly reduces the likelihood of injury.

Lauren Fleshman, two-time U.S. National Champion in the 5,000 meters, reached a turning point in 2010 when recurring injuries threatened to drive her away from competitive running. Unwilling to let dreams of running in the 2012 Olympics slip away, she added workouts on the ElliptiGO and radically changed up her training regimen to outsmart chronic injuries. After a year of using the ElliptiGO in place of 2-3 hours of running per week, Fleshman returned to top form in the 5,000 meters and matched the highest finish ever by an American woman at the 2011 IAAF World Championships.

Injuries have been Fleshman’s nemesis since graduating from Stanford in 2003 as a 15-time All-American. “After college I broke my left foot four times during training. I realized that I had to get smart and do something different or I would never compete again,” Fleshman recalls. “I had to face the fact that I had limitations and that I couldn’t train like everyone else with high-mileage weeks.” When she found the ElliptiGO in 2010, Fleshman knew that she had the solution to her problem. She could continue to build cardiovascular endurance as she ran on the ElliptiGO, but she could do it without the jarring impact associated with her regular runs.

Designed by runners, the ElliptiGO is the first outdoor, low-impact, fitness device specifically designed to emulate the running motion. It allows athletes of all levels to get a high-intensity workout without experiencing the repetitive impact of running. Healthy athletes and injured athletes alike have found it the most effective way to get an outdoor running experience without the usual pounding on their bodies.

“I knew my body couldn’t tolerate running more than 80 miles per week, so I filled in gaps with the ElliptiGO,” Lauren explained. “Instead of going out and putting the additional volume on my legs and joints, I rode it for the equivalent amount of time that I would be running, replacing some of my key training and recovery workouts.”

As a relatively new product, there were no established ElliptiGO training regimens for professional track athletes like Fleshman to follow. She had to use her years of experience as a runner to guide her in her new training strategy. “When I run on the ElliptiGO, I try to mimic the same heart-rate zones I would have done in the runs I’m replacing. It’s been an effective way to incorporate more training and recovery workouts into my regimen,” Fleshman added. “I’m able to keep my fitness level on par with my competitors while putting in fewer miles, which greatly reduces the likelihood of injury.”

“We are thrilled that Lauren found ElliptiGO to be the perfect addition to her training regimen,” said Bryan Pate, Co-Founder and Co-President of ElliptiGO. “We’ve recognized from the start that the ElliptiGO provides a high-performance, high-intensity workout that more closely mimics running than any other machine on the road or elliptical trainer inside a gym. Now, professional runners from Lauren Fleshman to Josh Cox and Adam Goucher have realized its potential and are using it to run without impact as a supplement to their training.”

Running faster by running less seems counterintuitive, but by letting go of the constraints of traditional training, Fleshman created a whole new way to compete on the world stage. She proved this by being the top American finisher in the 5,000 meter event at the IAAF World Championships in September and the second American woman to cross the finish line at the 2011 New York Marathon in November. “It’s been my best year ever and I’ve been able to stay healthy enough to race in my debut marathon in New York City.” Fleshman said.

Fleshman’s performance in these events is evidence that her new strategy of running less and cross-training on ElliptiGO is paying off on her journey to a podium finish in London next summer. “We wish Lauren the best in her training and are excited to be a part of her Olympic dream,” said Pate. “In the future, we expect many more professional runners to use the ElliptiGO as Lauren has to both extend their running lives and make themselves faster, stronger athletes.”

The ElliptiGO is available for sale at http://www.ElliptiGO.com and at specialty bike or fitness stores in ElliptiGO’s national dealer network.

About ElliptiGO
ElliptiGO, Inc. is a San Diego-based company that created the world’s first elliptical bicycle. By modifying the elliptical trainer motion and combining it with the functionality of a bicycle, the ElliptiGO® line of bikes delivers a high-performance workout experience that closely mimics running outdoors while eliminating the impact. It provides the most comfortable, fun and efficient way to get out and stay active. The full line of ElliptiGO® bikes is available for purchase at select retailers nationwide and through the company’s website: http://www.ElliptiGO.com.

Lauren Fleshman on Her ElliptiGO